Contestants Belt It Out In North Point Idol 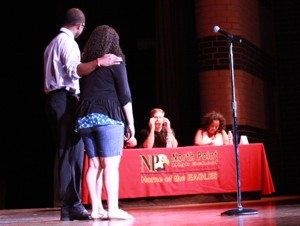 “And the next American Idol is……” As several million viewers tuned in to the finale of the hit reality competition, American Idol, Tony Teleky (’14) got the perfect idea.  As president of the class of 2014, Teleky created the very first North Point Idol, an event that would showcase singers around the school in a setting just like the original.

After several students auditioned, the group was narrowed down to the top thirteen singers at North Point.  Just like the original show, the thirteen contestants chose a song that they would perform in front of a crowd and three judges. One of the lucky hopefuls would be announced the first North Point Idol.

Whatever the tune was, each performer showed their personality on stage and captivated the audience.  They even got a few pointers beforehand by the special guest judge and performer, Regina Coonrod.  Coonrod had the pleasure of performing in this year’s Super Bowl.  She expressed to the contestants the importance of sticking to their dream and never giving up.  Coonrod even showed them some ways to shake the nerves.  “Before every show I do, I always take a peek at the audience to look for familiar or friendly faces so I can feel more comfortable,” she explained.

Soon, it was show time. Contestants showed their talent through tunes that were danceable, flirty or even heartfelt.  Familiar songs like Adele’s “Rolling in the Deep”, Beyonce’s “Halo”,  and Rihanna’s “Unfaithful” were complimented with lesser known selections, including INX’s “Don’t Change” and Bombshell’s “Fight Like a Girl”.  James McCollum (’12) got creative and even performed a medley of songs that he put together himself.

Living up to the famous Simon, Paula and Randy, the three judges critiqued each performance.  However, any true Idol show needs a Ryan Seacrest.  Layne Washington (’11) used his experience in hosting Coffeehouse to take the reins as the host of Idol.  As the host, Washington thought that “The event as a whole was excellent and well put together. It was a full crowd and they loved the talent that North Point has to offer. The class of ‘14 rose more than $2,000, so it must have been pretty great.”

Washington added flare and originality during the show, and although the crowd enjoyed his presence, the audience definitely showed enthusiasm when the performers took the stage. After each performer sang, and got their critiques, it was voting time.

The three judges scored each contestant. The tally would determine the first, second and third place winners.  Even the audience got a chance to influence the voting by picking their favorite contestant. The audience’s votes would choose who won the “fan favorite”.

As each performer was called back to the stage, the suspense grew.  With the crowd in silence, the announcer proclaimed Annaya Liverpool (’14) as “fan favorite” and the third place winner. Joining her was second place winner, Hannah Rogers (’13).

As the audience members were on the edge of their seats, the words “and the winner of North Point Idol is…Heather Yerecic!” rang out across the room.  The crowd cheered as Yerecic(’12) was granted her first place certificate and one hundred dollars. With everything happening so fast, Yerecic said, “It was unreal. I was immensely happy and overwhelmed. I’m pretty sure I hugged everyone on that stage.”

Besides winning, Yercic said her favorite part was “listening to everyone else sing. I know some people were very nervous because their mic check didn’t go as well as they thought it would. Everyone’s performance was a lot better than their mic check, though. I was really proud of them.”

The night ended on a high note, with smiles and laughs from the performers.  With the huge success of the event there is no doubt that there will be another. So, who will be the next North Point Idol?