The Soundtrack of Friday Night 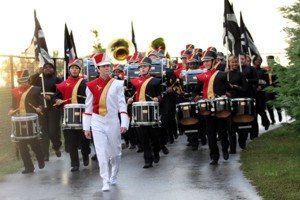 With a BOOM, BANG, TING, TANG, TOOT, WOOT, and WHISTLE the marching band accompanied by the color guard parade around the football field. Their melodies, harmonies, and beats fill the air and excite the crowd.

In one rhythm, step by step to the beat, and in tune with the music, the marching band commands the field. Armed with percussion, brass, and woodwind instruments they break into the silence of half time. The color guard hurl their flags into the jet black sky.

Marching band requires a great deal of dedication. Practicing two times a week and playing at every Varsity Football home game, it is crucial that all 52 members have good attendance. Student must budget their time wisely because nobody can fill their spots otherwise.  “ In marching band, unlike in a sport, we don’t have anyone to ride the bench,” Mr. VanDyke, band director, explains. “If someone is missing there is a hole.” The number one thing Brian Hall Jr.(’14) has taken away from marching band is not to miss a day, he said, “If you miss a day then you will be off on everything.”

Known for being a strong and cohesive group, members have a tight family-like bond and sense of comradery: engaging in activities before games and eating pizza. Members aid one another with everything from tone, to notes and posture.  Marching is hard for a lot of new members. “When you are new to it, it can be confusing” said flutist Natalie Ariman (‘15) who benefits from the help of more experienced members.

Drum Major Tiffany Hergett (‘12), has been in the band throughout high school, playing for the past four years, and is the historian of the band.  Now as Drum Major, she uses her music skills to control the band’s music. “I love marching band; I really want to do it in college,” she said ecstatically.

Dedicated flutist, Courtney Aceto (‘13), who loves marching band, plays on the sidelines despite her leg injuries. “I could have not come; I could have just dropped out and he would have filled my spot, but I come here by choice….If I could march I would,” she said.

According to the color guard captain, Elizabeth Burgess (‘13), “Marching band is a really unique experience. Everyone has this conception of it from movies and T.V shows that it is just geeky kids running around with instruments in hand all the time, but it is not. It is really like any other club or sports team.”