Book Review: The Fault in Our Stars Sheds Light into the Dark 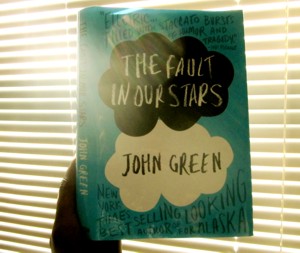 In this day and age, few books are awaited with anything nearing breathless anticipation. There is Harry Potter, and the Hunger Games, and Twilight. And then there’s The Fault in Our Stars.

The fourth novel from John Green, a Young Adult author and YouTube sensation (the channel he shares with his brother, Hank Green, has 200 million views), TFIOS was released in January to great fanfare from Green fans. The author pledged to autograph the entire 150,000 copy first printing of the book, making fans even more eager to get their hands on a copy. The novel has spent the subsequent four weeks since its release at #1 on the New York Times Bestseller List.

The Fault in Our Stars is in many ways a classic story. The protagonist is Hazel Lancaster, a sixteen year old diagnosed with terminal thyroid cancer. After attending a support group for diagnosed kids, she meets Augustus Waters, who has osteosarcoma that is in remission. The two bond over their shared experience and their love for a book called “An Imperial Affliction,” written by a reclusive author who lives in the Netherlands. Peter Van Houten, the author, ended his book mid sentence, so Hazel and Gus seek to meet him and find out what happens to the characters.

A story of teenage is love is not unique. A story of cancer is not unique. The tale of a book within a book is not unique either. But what makes The Fault in Our Stars a unique and engrossing novel is the skill with which Green uses those motifs to go deeper.

As teenagers constantly grappling with the proximity of death, Hazel and Gus contemplate what it means to be gone. “Everything that we did and built and wrote and thought and discovered will be forgotten and all of this will have been for naught….And if the inevitability of human oblivion worries you, I encourage you to ignore it. God knows everyone else does,” Hazel says to Gus at support group, after he admits his fear of oblivion.

All 313 pages of the book feature this well considered writing. The characters are people that teenagers can relate to, but at the same time they are not dumbed down or vapid. After all, how can one be vapid when, at sixteen, your circumstances mean that you have chosen the suit that you will be buried in?  It is obvious that every word of Green’s was well considered and well used. English students take note – this is what your teachers mean by diction and tone being used well.

“I was eating Chinese food with a box of tissues and I cried. [TFIOS] was so good,” said Bri Busch (’13). And according to Jacob Moyer (’13), “It was very good because it captured your attention even though it wasn’t an action packed thriller type of thing.”

TFIOS also hits on many other themes, from cancer as civil war (how can Hazel “fight” cancer when the cancer cells are her own as much as the healthy cells?) to the pitfalls of idolizing our heroes. One reviewer called this novel “luminous”. I certainly echo that sentiment. The Fault in Our Stars is an outstanding novel, and it will certainly bring light to anyone who reads it.