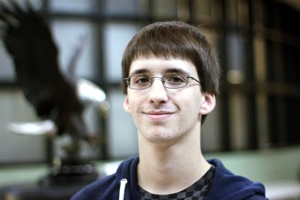 Would you be surprised to know that there is a Steven Spielberg in our midst? His name is Richard Pence and his cinematography is top notch. Sporting a compilation of sublime photography, action packed plots, and technical skill; his work is not for the faint of heart. His great panning, graceful composition, and gripping plots capture the heart and minds of North Point students alike. People can only gawk at seeing his short films that look like they belong on the big screen.

Before Pence became a cinematographer, photography was his specialty. In seventh grade he got his first camera for Christmas. With it in hand, he began delving into the craft- acquiring an eye for composition, learning technique, and developing his unique aesthetic. It was not until two years ago that he switched into the realm of moving pictures. Watching online tutorials and practicing tirelessly, he honed the art. Soon enough he was making full-fledged films that both shock and awe his audiences.  “I think he is extremely talented. If he continues to work hard then he can go far with it,” said Multimedia teacher Ms. Bogart.

Creating videos is a very time-consuming task; depending on the video, it could take an eternity just to get finished product. The bulk of all the time is spent editing; “If I am making something that is heavy on special effects then I will film it in one day and editing will take weeks and weeks to get everything done,” he explained. On top of that, it can take ages just to get the right filming weather and record all of the sound. No matter how long it takes, Pence sacrifices the time and puts in the effort because ultimately, he enjoys what he does.

Pence aspires to use his skills to his advantage and go far one day; in his words, “I want to make it a profession someday. Either I will become a director someday or just a producer for a commercial or something.” He plans on attending the College of Southern Maryland in the fall and either go to film school or snag a job in the field after that.

For now, he is working on a new short film titled Escape, which will be at least thirty minutes long and is projected to release this July. The critics say it will be a hit!