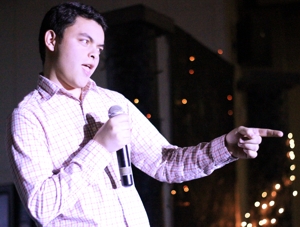 Many may make noise, but few can create music in the versatile style of Brad Sharper. His musical talents have elicited the attention of many students and staff alike. His relatable lyrics, sweet sound, and technical skill leave audiences spellbound, waiting for each and every delightful note.

Music has been intertwined in Sharper’s life since it was introduced to him as a youngster. At eight years old, his mother forced him to play piano and violin. Once sixth grade rolled around, he joined the choir and soon fell in love with singing. It was not until he first saw John Mayor singing and playing the guitar that he decided picked it up. Ever since, he has built his skills, become a singer songwriter, guitarist, and musical maestro. On top of that, he has learned to play the drums, dabbled with the ukulele and began playing the saxophone. Taking the North Point music world by a melodious storm, he has done everything from North Point Idol and Coffee House to participating in choir and musicals.

While it may seem that working so much with music would be life-consuming, personal situations and experiences are poured into Sharper’s music. Every lyric is a reflection of personal situations and high school drama. Writing music is a therapeutic process, in which he releases all of his stress. In his words, “it is when I can’t really talk to anyone about those kinds of things I just write it in a song.  That is my way of letting it all out.”

The song writing process begins with the roots: inspiration. Sometimes thinking about conversations he has had with friends sparks his lyrics. From there he comes up with chord progression and collaborates with his musically inclined friends like Richard Pence, Alex Hannah, and Kyle Upchurch. Together they are bounce ideas off of one another, record their tracks, and come up with well-composed music.

Looking down the road, the musical genius works to have a full-length album on iTunes and see where his career goes from there. For now, Sharper hopes to play with his friends for as long as possible and learn how to play more string instruments like the violin and the cello. If all goes well, this master of music in the making will be having your ears begging for more.