Cast Shows That “You Can’t Take It with You” 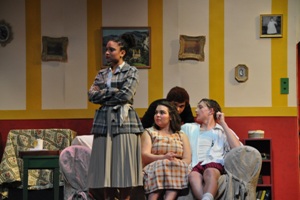 On the night of November 8th, people of all ages trickled into the North Point auditorium. The audience was greeted with softly played classical jazz-swing music as they found their seats.  Conversation lowered to a low murmur as the house lights dimmed and the lights of the stage began to illuminate the room.

This year’s play, You Can’t Take It with You, ran from November 8th to the 10th. The production was a comedy that had a winning combination of light entertainment and a bit of heart.

Set in 1938, You Can’t Take It with You tells the story of Alice Sycamore (Dakota Gray (’14)) and her fiancée Tony Kirby (Ethan Kriemelmeyer (’14)), the son of her boss Mr. Kirby (Jeremy Drew (’13)). The main conflict of the play is Alice trying to impress the Kirby family during a family dinner. However, trouble ensues when the Kirby’s show up a day early, catching the rather strange Sycamore family off guard. The story follows the hectic and comedic series of unfortunate events, including explosions, a night in jail, and more.

The actors in the play were casted very well, with each actor fitting in with the character flawlessly. Though the whole cast’s acting was superb, a few of the characters were especially memorable. Armando Rivera (’14), who played Martin Vanderhof, easily delivered several witty one-liners that were responsible for many laughs during the show. Another stand out role was Kim McCloskey (’14) as Penelope Sycamore. Every time she was on the stage the audience was thoroughly entertained with her vibrant energy and animated acting.

“The hard part about the show is that it’s very character driven, but I think we did a really good job with the casting,” commented Mr. Minor, a theatre teacher and the director of the play. “It doesn’t matter if you have a big part or a small part; it only matters if you’re in the right part.”

Despite a few challenges, the actors all seemed to pull it together very nicely. “Getting all of our cues rights was the biggest challenge for me,” said Alex Beauchamp (’15), who played Mr. DePinna in the play.

While the acting and casting were very good, another aspect that shined was the set itself. Despite the play taking place in one room for the duration of the play, the small details of the professional looking set really captured the essence of the time period and the strange antics of the Sycamore family perfectly.

“The students took the ideas and put in all the work. All I had to do was guide them and add some finishing touches,” said Mr. Labelle, the technical director of the play. “I think it was a big success. I’ve been here for five plays and we’ve never been more prepared for opening night than this year.”

Months of preparation and hard work showed at the end of the night, with a production that will not soon be forgotten. While the fall play is over, all that can be done is wait in anticipation for North Point’s next production in the spring.