Beautiful Creatures: The Start of a Beautiful Series 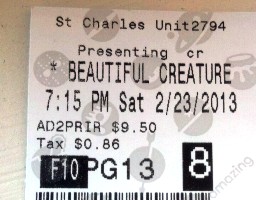 The movie, Beautiful Creatures, first hit theaters on Valentine’s Day. This movie was made to attract fans of fantasy and romance. Twilight fans were also attracted to this movie since both film franchises have strong similarities.

The movie starts out with one of the main characters, Ethan Wate, and how he is not happy with the small, southern, strongly religious town he lives in. He has also been having dreams of the same girl for months. The girl of his dreams ends up being the new girl in his junior class named Lena Duchannes, who everyone has the wrong impression of. Ethan later figures out that Lena holds a dark secret: she is a witch, but she prefers the term “caster.”

The great thing about this movie is that it is filled with suspense for the whole two hours. There was not one ounce of predictability; it had viewers thinking and guessing what was going to happen next. This film also had its handful of twists that you did not see coming, and a good amount of intensity that kept you on the edge of your seat.

According to Kami Garcia’s series, Caster Chronicles, and how the movie ended, we should be seeing a few sequels in the future.