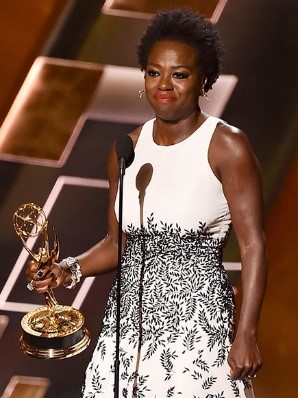 The biggest thing that seemed to have come from the Emmy’s last Sunday was progress. With two African American woman winning huge awards one for the first time in history, one for the second, the only disappointment seemed to be why hasn’t this happened sooner?

Her words speak volumes of truth. In award shows besides the Emmys, there has been few nominations. Throughout the entire history of the Oscars, there have only been ten African American women nominated for an award, including Davis herself. In history of the Emmys. This year only six African Americans were nominated for an award. Out of that, five were leading actors, and two won. The same award show was surrounded by a huge controversy earlier this year involving nominations. The controversy stemmed from the lack of nominations for movies that featured diverse characters. Selma was the only one nominated and its leader David Oyelowo wasn’t nominated at all.

Although there is still a problem with lack of diversity in Hollywood there have been some serious innovations lately. Top television shows such as Empire, Scandal, and of course How to Get Away with Murder all star an African American woman, and in the case of Empire an African American cast. Uzo Aduba who plays “Crazy Eyes” In Orange is the New Black also made history in the Emmys this year. She was the second African American woman in history to win both the best supporting actress in a drama and comedy for the same character.

Hollywood shouldn’t ignore the lack of diversity. Audiences have cried out for years for movies and television to star more African Americans. With these awards being won, it could mean that someone is finally listening.