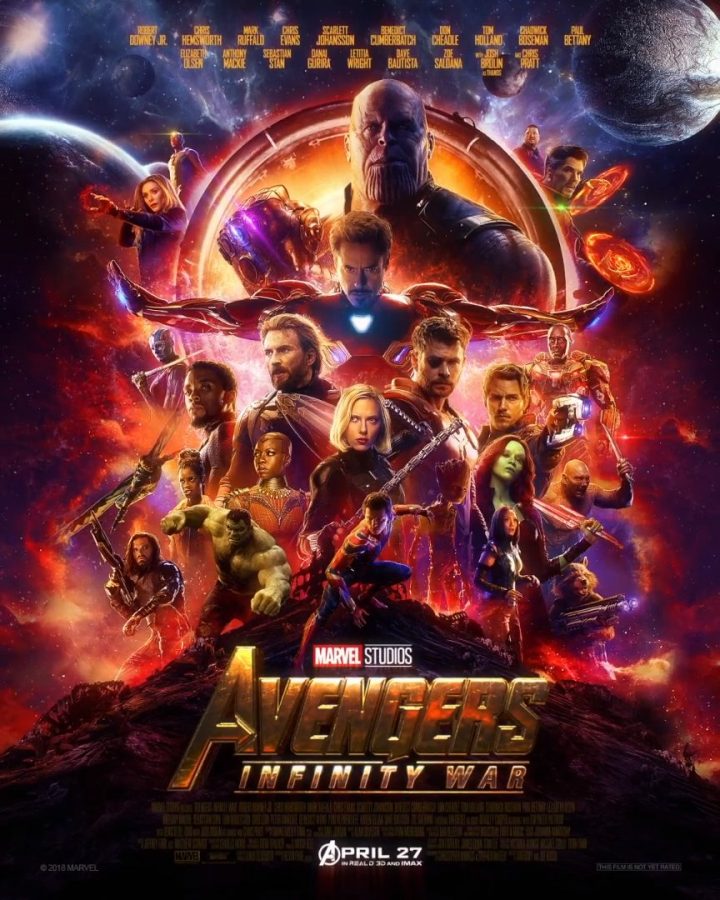 Earth’s mightiest heroes strike again as Avengers: Infinity War released on April 27th, changing everything we know about movies. In this installment, the Avengers, as well as the Guardians of the Galaxy, team-up to prevent Thanos (played by Josh Brolin) from acquiring all five infinity stones; which, if united, will give him the power to extinguish half the life forms in the universe with the snap of a finger.

The film was released just a few weeks ago, however it emerged from an eight year waiting period. This is the penultimate movie of the entire MCU (Marvel Cinematic Universe), which stared with the first Iron Man, starring Robert Downey Jr, in 2008. And in the original Avengers movie (2012), we got out first tease of Thanos in an iconic post-credit scene where his servant, The Other, proclaims to him, “To challenge [humans] is to court death”, as Thanos then gives off a sinister smile. Thanos’ other appearances in movies would be in The Guardians of the Galaxy (2014) and another post-credit scene in the second Avengers movie, Avengers:  Age of Ultron (2015).

With over 40 main characters, Infinity War excels at building the Mad Titan Thanos. This film uses the 19 other films in its cinematic universe to balance out all of the characters shown and actually make the villain the main character. Senior Dylan Coleman stated, “Infinity War, in my opinion has probably the greatest villain in a movie. What some of the other Marvel movies lacked was a compelling villain, with them more often than not being a carbon copy of the protagonist. But Thanos wasn’t evil just for evil’s sake. He has a goal, a reason for wanting to destroy half the universe, because he thinks it’ll save everyone in the long run. And when you look at it from his perspective, he’s not the bad guy, rather he’s doing what he thinks is necessary, which just so happens to include fighting our favorite heroes.”

Avengers: Infinity War earned another $6.044 million on Tuesday, soaring 31% from its $4.6m Monday gross and bringing its 19-day domestic total up to $558.7m. It also earned $10.1 million in China and around $8m in the rest of its overseas yesterday. That brings its global total to around $1.675 billion. That’s over the $1.672b cumulative of Colin Trevorrow’s Jurassic World. That means that the Russo Bros.’ Avengers: Infinity War is the fourth-biggest global grosser of all time and the biggest summer movie ever in unadjusted global grosses. It’s also the biggest movie ever not to open on Dec. 18 (The Force Awakens at $2.068b and Avatar at $2.788b) or Dec. 19 (Titanic at $2.188b).

Infinity War is a movie an entire decade in the making and lives up to, and even exceeds its hype. Senior Michael McCloskey reflected, “This movie was awesome, combining dozens of heroes together and giving us a story which had an actual impact. It had so many twists an turns, making it so exciting, yet heartbreaking seeing the fates of some of our heroes. I’ll be honest, getting to know these characters over the span of 19 movies, I teared up a little bit at the end.” Avengers: Infinity War is a movie of tremendous proportions, and with its next installment (Avengers 4) just a year away, people are insanely excited to see what comes next.