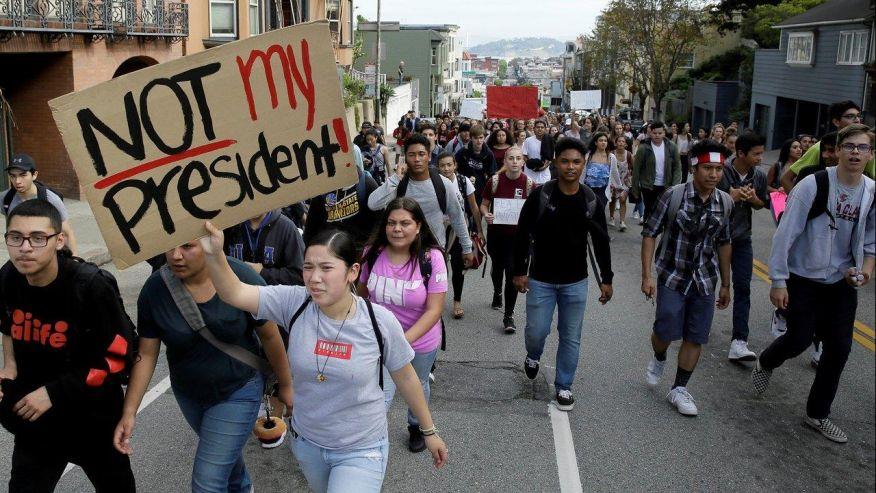 In the wake of the 2016 presidential election, there has been mass upset and hysteria across the nation. Anti-Trump protestors have been spotted in major cities such as, New York, Los Angeles and San Francisco, as well as other metropolitan areas. On November 12, demonstrators marched to Trump Tower in Chicago to express their discontent with the election results.

Protestors are upset about Trump’s policies on health care, the environment, LGBT rights, reproductive rights, immigration and racial issues. Some people are wondering how true Trump’s victory over Hillary Clinton is, considering the fact that although he won the Electoral College, Clinton won the popular vote.

Peaceful demonstrations have been practiced and some have gotten violent. In Portland, Oregon, on November 12, was the site of the most violent anti-Trump protests. There was a shooting and the arrest of 71 people. There have even been protests in Charles County’s backyard. Just recently in D.C., more than 2,000 middle school and high school students skipped class to protest the election of Trump. They carried signs while marching and chanting all through downtown until they reached Trump International Hotel on Pennsylvania Avenue. The students said that it wasn’t an anti-Donald Trump rally, it was a march to show that they want their demands to be heard. They want to let Trump know that they are interested and engaged, and possibly help change some of his views and opinions.

When asked how she felt about the president-elect using Twitter the way he does, sophomore Erin McNeil said, “I don’t really think he realizes the number of viewers he has and the impact that his words have on people.” She also shared her thoughts on the hateful speech that has been thrown around by people after Trump won the election, “Him winning the election is no excuse at all to verbally attack others and it’s very disrespectful. I don’t understand what makes people think that the election of a person gives them the right to believe that they are superior to others.”

Sophomore Jasmine Forbes said that, “People need to understand that just because you believe in something does not mean that you can discriminate against others on something they can’t change (race, gender) because your “president” does.” Forbes also believes that the president-elect “uses Twitter in a sort of bashing way” and doesn’t maturely run it.

The protests that have broken out in the days after the election results were announced have been peaceful, but some have turned violent. Many arrests have been made, but the people have continued to march on towards one common goal- to express their desire for Trump to change his views and opinions on many issues that are plaguing America. The people have shown their disappointment and discontent with Donald Trump being the forty-fifth president of the United States. It is up to Donald Trump to recognize what the people want from him as the president, and make decisions for the common good of the country.