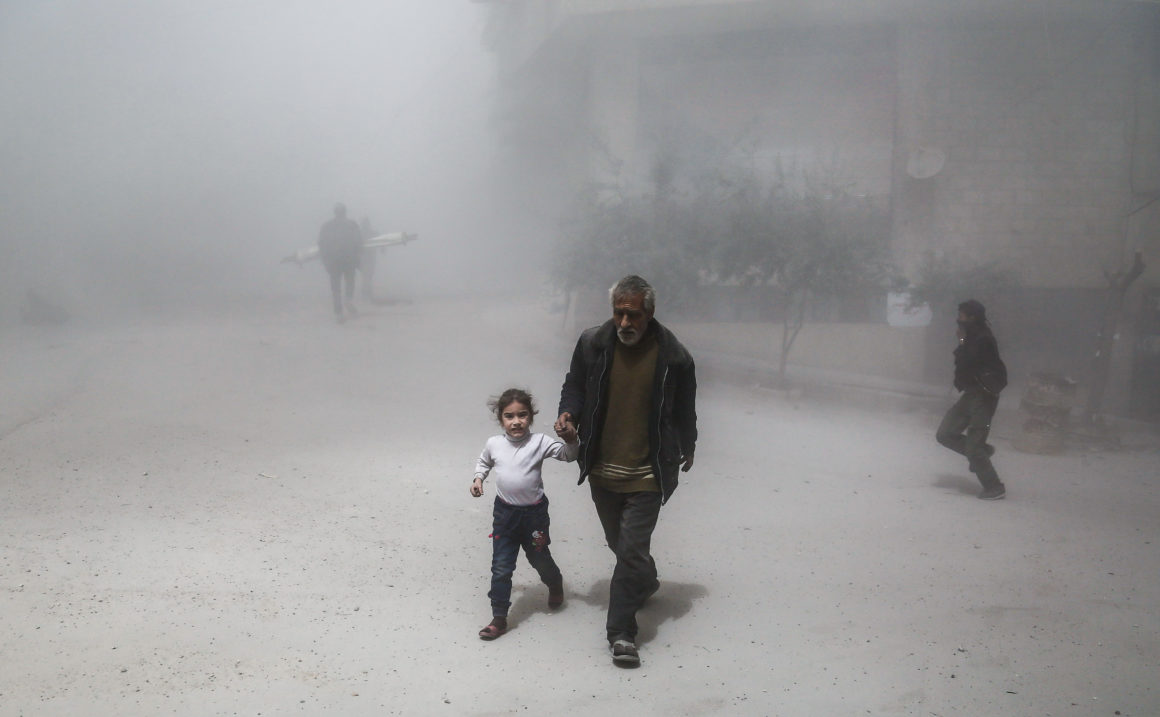 TOPSHOT - A Syrian man and girl flee following a reported government air strike on the rebel-controlled town of Hamouria, in the eastern Ghouta region on the outskirts of the capital Damascus, on April 4, 2017. / AFP PHOTO / ABDULMONAM EASSA (Photo credit should read ABDULMONAM EASSA/AFP/Getty Images)

These past few weeks have not been good for the people of Syria. Recently, the Syrian Government launched a series of chemical attacks on its own people, causing widespread chaos, injuries, and death among Syrian citizens. President Donald Trump responded to these attacks, by authorizing the launch of 59 missiles on the Syrian Air Base responsible for the launch of the recent chemical attacks. This action by the president has received “a mixed bag” of reactions and critiques from all around the nation. For those at North Point High School who keep up to date on the latest events, some students have gathered and determined opinions of their own on the subject matter. North Point Senior and Student Council President Joseph Perriello believes that the launch of the missiles was “good for sending a message.” This is an opinion that is widely supported, and by reasonable logic, was an acceptable action to take. However, there were multiple reports of some of these missiles missing the Syrian airbase, and killing innocent civilians. It is also worth mentioning that the Syrian airbase was running properly within a day after the attack. North Point Senior Calvin Gao questions the Trump administrations’ actions, “What is the point of sending a message when we only hurt the people we are supposed to help?” If a significant majority of the missiles fired missed their target, was the action justified? Is there a point to attacking if we only end up hurting those we are attempting to “protect?”

Since the attempt at bombing on the Syrian air base, President Donald Trump and Russian President Vladimir Putin have begun discussion on “what to do about Syria.” The White House gave a statement, claiming that the talks between the two were “very good” regarding the future for the war torn country. An idea brought up between the two world leaders is the creation of “safe zones” in Syria, places where citizens are protected by American and Russian military forces. Will these plans actually come to fruition? Only time will tell. President Donald Trump and President Vladimir Putin have scheduled to meet in person sometime in mid-July.

The Syrian government has not been deterred by threats from the U.S. As tensions continue to boil among Syrian citizens and the government, the need for change has never been more necessary. The spotlight now moves to President Donald Trump and President Vladimir Putin to find a solution to the troubles in Syria.