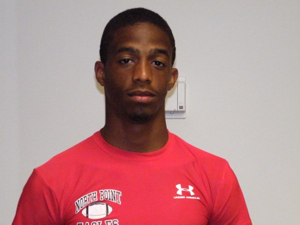 Faster than a speeding bullet, Randall Grosse (’11) takes off from the starting line. Forty-nine seconds later, he is deemed the fastest 400 runner in the state. It’s his first year in track and he’s already making a name for himself.
Born in Baltimore, the athletic prodigy, has lived in Waldorf for the last ten years.
After joining track, he discovered that things don‘t always come as easy. There is the winter season when you layer up and workout in cold conditions followed by the spring season when the workouts intensify. It took a while to adapt and really grow. The feeling of victory is what keeps him driven.
Going to Morgan State for ‘states’ was nerve racking. It was Randall’s first time, and he was running against the best and the fastest. Not knowing what to expect, he gave it his all.
When he won the 400 race he was surprised at how much attention he got for it. Since colleges have been making him offers left and right, he has been looking at first string college programs. He would like to get accepted to Penn State or Miami State University.
His life long dreams include becoming an Olympian and running with the absolute best then later becoming a coach with a chance to enrich the lives of others. But Randall also loves to work on cars. He has ambitious dreams of owning his own shop and having others work for him. He also loves to eat. There is never a time you won’t find food in his hand outside of school.
His advice for aspiring track athletes are to “work hard and train hard, make sure you really listen to your coaches, and fix the little things because that is what really counts.”