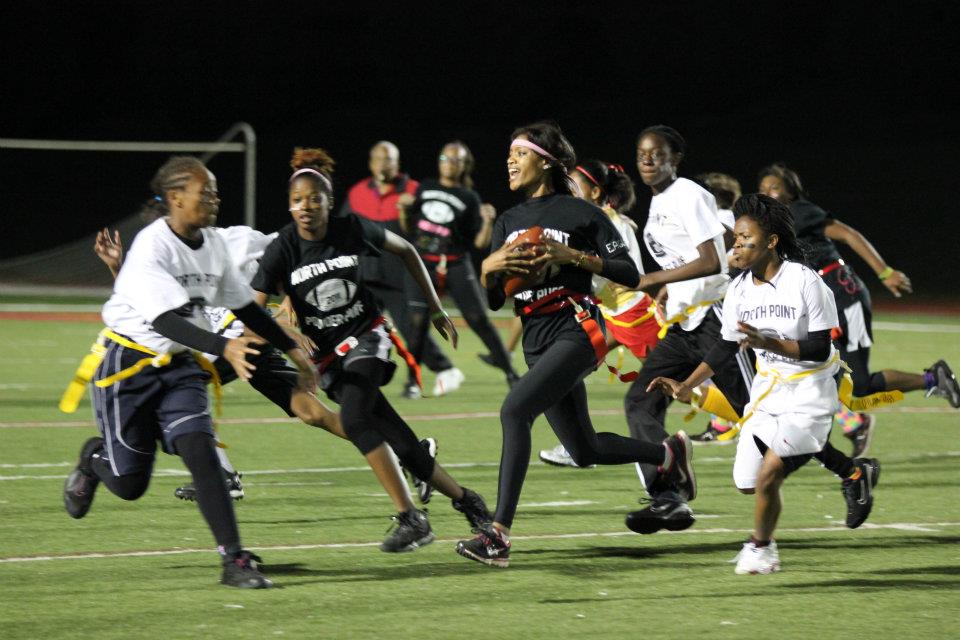 This year’s turnout for the Powder Puff game was unbelievable; the stands were filled by students the whole night from start to finish even as it got colder and windier. Who would of thought on a night like this, with the weather being more unpleasant than normal, that the Powder Puff game would have this much support?

What in the world is Powder Puff football? For those who don’t know, it’s one of the events North Point puts on every year during Homecoming week, where females take the position of males and play football while the males cheerlead. Each team is organized by graduating class and then competes against one another to win the right to say that they were the victors. It’s all fun and games – just something that is put on to entertain and show school spirit.

The first game kicked off with the freshmen and sophomores going head to head on the gridiron. This game didn’t really seem to interest most people as very little action happened until later on in the first half. Eventually the girls got the hang of it and the competition begun. The sophomores   broke the deadlock first and never looked back. They had a couple big running plays which allowed them to defeat the freshmen 12-0.

The next game was the most hyped game of the night, the seniors vs. juniors. With a big senior crowd, including a lot of the varsity football squad, the senior class got up out their seats and went to cheer and support their fellow classmates to victory for one last time. After the game kicked off, there was a lot of back and forth play; the game looked to be a defensive game as neither team scored until the juniors did with a minute left in the first half. Halftime came and so did the new all male North Point cheerleading squad, who cheered one of the classic North Point Varsity cheers “Smooth and Easy” till the end of the halftime break. As the second half started up and winded down nothing occurred but missed opportunities by both teams. With a minute left, things weren’t looking good for the seniors. Scoring with a minute left must be common Powder Puff Football, however, as the seniors pulled out a touchdown. Then came the decision for the extra point; going for the tie or the win. The seniors took a risk by going for two and didn’t convert. Sadly they lost by one, but fought hard but didn’t look down on themselves.

The next game was the consolation game between the two losing teams, the freshmen and seniors. This was referred as “the Battle of the Modulars” since Mrs. Emple (the freshmen coach) and Mrs. Centivany (senior Coach) both teach in the trailers. The seniors played no games, running the ball right at the freshman defense for multiple long gains, and at half the freshmen found themselves down by fourteen. This time around at halftime there weren’t any cheers, but a dance battle at midfield with the seniors and the freshmen. Seniors Tyler Vaughn, Dayon Greene, and Zack Nguyen showed them how the Class of 2012 moves. After the break, the scored stayed this way and the seniors defeated the freshmen 14-0.

For the final match-up, the sophomores and juniors battled for the Powder Puff Championship Game.  This was the most competitive, intense match-up of the night. Both teams didn’t want to be defeated as the game was tied by the end of regulation. After the first overtime, everything was still even. Then the second overtime came and the juniors scored first and held off the sophomores all four downs. The junior players, fans, and supporters celebrated but a penalty flag was thrown and the sophomores were given a second chance with a new set of downs. The very next play the ball was thrown by the sophomores but it was intercepted by a junior, giving the victory to the juniors. The Class of 2013 was finally able to celebrate a hard fought victory. They have now won for the second year in a row, as they won last year as sophomores. Can the Class of 2013 three-peat next year?