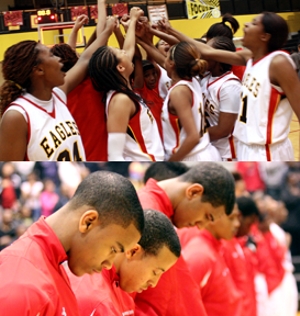 Coming into Wednesday, the North Point Eagles Varsity Boys Basketball Team was riding a 30 game winning streak, and nobody had an answer for them. The last time the Eagles lost a game Osama Bin Laden was alive, Waldorf had not seen an earthquake in 50 years, and #NPNation had never been a trending topic on Twitter. Fresh off a 35 point win versus Leonardtown, confidence was high and the boys were ready to start this double header the right way. The Thomas Stone Cougars, however, had different plans in store.

From the start, North Point dictated the game with their up-tempo style of play.  Guard Tre Mouton (’12) scored the first points for the Eagles, but the Cougars used teamwork to keep themselves in the game. A steal here, some good defense there, and a foul drawn on the other end of the court were some of the little things the Cougars were doing that are very important over the course of an entire game. By the end of the first quarter, the Eagles led 20-17.

The second quarter was more of the same, but with a better effort by Thomas Stone. Junior Michael Briscoe and Senior Michael Aderinkola led the charge for the Cougars as they kept even with the State Champion Eagles. Neither team was able to get an edge before the end of the half, so North Point retained their three point lead.

The second half was worth an entire game in and of itself. The third quarter saw huge runs by both teams, and the fourth was a fight to the finish. It all began with more of the fast-paced, up and down mentality that ruled the first half, except this time North Point was reaping all the benefits. A pair of highlight plays by starting Point Guard Marquis Wright (’13) helped the Eagles build their lead to 11 points midway through the quarter. However, it all went downhill from there. Naim Muhammad (’13) started suffering from leg cramps, and looked injured the rest of the way. Mouton got his fourth foul, and had to come out of the game. Forward Matt Bonds (’13) earned his fourth foul, and was forced to sit out as well. By the end of the quarter, the Cougars cut what was once an 11 point lead back down to four points, 59-55.

The final quarter was an epic defensive battle. Neither team could make a field goal. Both teams looked sloppy, and exhaustion led to leg cramps for players on both sides of the court. However, the advantage was clearly with Thomas Stone. The Cougars took their first lead, 60-59, with 6:22 to go. Everyone in the gym was getting into the action, including both teams’ cheerleaders, who engaged in a shouting match during a full timeout. The Eagles continued to battle, but Stone still led by one point with one minute left in the game. North Point would score no more, and the Cougars finished with a 71-66 win.

The Eagles (3-1) will look to get back on track on December 27th vs. Eastern High School (1-4). Their chance to avenge this loss comes in February at Thomas Stone, so the Eagles will have about two months to improve before then.

On a brighter note, the Lady Eagles ran away with a victory over the Lady Cougars in game two of Wednesday’s double header. The girls got off to a quick 5-0 start, and Stone would never get any closer than that.  The hustle of Verkia Smith (’12) helped to dictate the start of the game. She dove into the scores table for a ball, and ended up with a great assist that got the crowd into the game. On the next possession, she proceeded to pick-pocket the Lady Cougar’s point guard and dish out another assist. Overall, play was sloppy throughout the first quarter, but North Point led 12-6 after one.

In the second quarter, the Lady Eagles began to pull away. The Lady Cougars were physically outmatched. Nobody on their team had the size and athleticism to defend Diana Logan (’12) and Tasia Butler (’13) as they helped lead a huge scoring run. By the end of the half, North Point led 33-17.

The second half was more of the same: domination. It all came from an outstanding defensive effort. Thomas Stone never scored more than 11 points in a quarter, and the Lady Eagles outscored them by double digits in two of the first three quarters. This set the tone for a fourth quarter that gave North Point a chance to showcase their talented reserve players, who played a pretty even game with Stone. The end result was a 56-32 victory for North Point.

The Lady Eagles (4-0) play their next game against Broadneck (4-0) on December 27th. They will look to continue their winning streak, and continue to improve their all around game over the holiday break. Although they played a great defensive game, free-throw shooting (7-20) is just one of many offensive skills that they will need to work on going into their next match up.