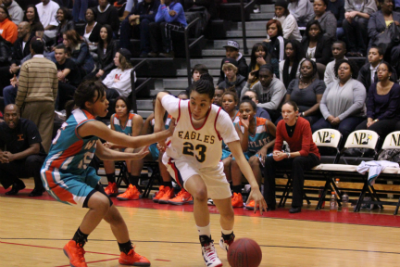 On February 3rd, the North Point Boys and Girls Varsity Basketball teams played a double-header against in-county rival Westlake High School. With both teams coming off of single digit wins against Calvert, this evening was expected to provide mixed results for the Eagles. The Boys were head and shoulders above Westlake going into Friday’s contest, while the Lady Eagles knew that they would have a deathmatch with the Lady Wolverines

The Boys started off the night against the Wolverines.  In recent history, North Point has dominated in games against the Wolverines, including a 66-50 win at Westlake last month. From the moment of the opening tip-off, it seemed much of the same thing for the Eagles. North Point quickly jumped out to a 10-0 lead to start the game.  Westlake gained their composure after a few minutes, and played gritty defense, but a smooth assist from Marquis Wright (’13) to Matt Bonds (’13) helped them to finish the quarter down 25-16.

As the game co 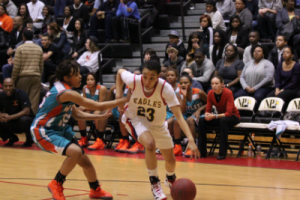 ntinued to go back and forth in the 2nd quarter, the crowd turned to an interesting display off the court. The Charles County Champion North Point Varsity Cheerleaders got into a battle with the Westlake Cheerleaders, who were dressed in street clothes in the bleachers. When the action started heating up off the court, on the court action heated up as well. A big time dunk by Bonds put the Eagles up by 15 with less than a minute to go, but a technical foul for taunting helped Westlake limp into halftime down 44-30.

Westlake came out hot in the third quarter, going on a quick 6-0 run capped off by a two-handed dunk. The Wolverines fought hard, but the talented Eagles fought back even harder. Some tough defense here, a few fast breaks there, consecutive dunks by Naim Muhammad (’13), and North Point soared into the final quarter up 62-44.

The fourth quarter was more of the same: Big dunks by Muhammad, and great team play by everyone. The game got way out of hand late, and the Eagles won in blowout fashion 89-62. Muhammad led the Eagles with 23 points, followed by Tre Mouton (’12) with 21, and Bonds, who added 17.

After the show by the Boys team, the Lady Eagles took the court against Westlake. Though 11-6 at the time, the Lady Wolverines were not a team to overlook, as North Point only won by three in their first meeting.

The Lady Eagles started off with a bang, scoring eight unanswered points. Westlake fought back just as hard, scoring seven unanswered points before Miesha Adams (’12) ended their run with a three pointer. After a tough first quarter, North Point found themselves down 17-15.

In the second quarter, North Point seemed to find their defensive groove again, forcing multiple turnovers and frustrating the Lady Wolverines. “We switched up some defensive looks and got ourselves more into the game from a mental standpoint,” stated Coach Serpone on his team’s defensive adjustment.  The Lady Eagles only allowed six points in the second quarter and went into halftime with a 30-23 lead.

When the action resumed, both teams began to pour on the points. North Point and Westlake matched each other nearly shot by shot, while Westlake inched closer and closer to a tie. Though Westlake outscored North Point 24-18 in the third, North Point still owned a very slim 49-48 lead going into the fourth quarter.

In the fourth quarter, the action on the court heated it appeared to be anyone’s game. The Lady Wolverines stayed close with North Point throughout the quarter, and a few times, lead by one. Forwards Diana Logan (’12) and Ebane Mainor(’13) both fouled out, taking away two important elements to the Lady Eagles’ game.

With two minutes left in the quarter, the game was tied 64-64. On the next North Point possession, guard Chalise Greenwood (’13) was fouled while attempting a shot. The ball went in, but the basket did not count, so the Lady Eagles had to settle for one point as she missed the second free throw. Both teams scored one more basket each, and the Lady Eagles found themselves clinging to a 67-66 lead with 25 seconds to go after calling a time-out.

“Under no circumstances do we shoot,” Serpone said to the girls during the time-out. With the shot clock turned off, the only option was for Westlake to foul and hope for the best. But after waiting ten seconds to foul, the game seemed over for Westlake. After two missed free-throws, though, Westlake found themselves back in the game with 14 seconds left. They took the ball down court and called a time-out with a few seconds remaining in hopes of drawing up a game winning play. For one final time on the night, North Point came through on defense. Westlake was forced to take a bad shot with two seconds remaining, and after a heart-stopping quarter, the Lady Eagles escaped with a 67-66 win. Serpone noted that the outcome of this game was very important to the Lady Eagles quest to regain the SMAC Championship. “We didn’t downplay it at all and knew Westlake would come out swinging.  There was plenty on the line Friday night for both schools.”

After a lively weekend, both squads will take on the Leonardtown Raiders. This game should be a warm-up for both teams before their double-header against Thomas Stone on Friday, February 10th. For the Boys, the game against Stone will be the unofficial SMAC Championship game (Stone beat North Point in December in a Non-Conference matchup.) The Lady Eagles should not have any problems with the Lady Cougars, who they beat by 26 points in their earlier match-up.