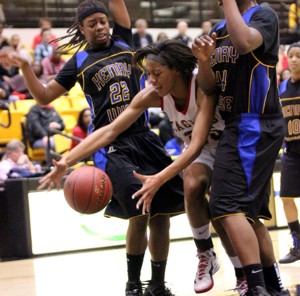 On March 10th, 2011, the North Point Girls Basketball team hung their heads low after a 62-35 defeat at the hands of Gaithersburg High School, who eventually went on to win the Maryland 4A State Championship. The Lady Eagles did not rest on their laurels, however, as they came back this year better than before. After a 23-1 campaign, including stealing the SMAC Champion title from Calvert High School, the Lady Eagles found themselves in the very same game 364 days later. This time around, the Lady Eagles matched up against Henry Wise High School of Prince George’s County. Early on, though, North Point had their work cut out for them.

The Lady Pumas started the game on fire with an 11-2 run. The relentless full-court press used by Wise frustrated the Lady Eagles into multiple turnovers, which Wise turned into point. Halfway through the quarter, as the Wise pressure relaxed, North Point slowly began to cut the deficit. After a Chalise Greenwood (’13) layup to end the quarter, the Lady Eagles only found themselves down 19-12.

In the second quarter, North Point turned the tables, scoring the first six points of the quarter before a Wise free throw put the Lady Pumas up by only two. Once again, though, Wise went on a run before a Miesha Adams (’12) layup halted the Lady Pumas. By the end of the second, the Lady Pumas and Lady Eagles were deadlocked at 26 apiece.

The Lady Eagles came out of the half with an 8-2 run to start the third quarter. After calling a timeout, Wise then began a run of their own, outscoring North Point 21-5 the rest of the quarter. Down 47-39, the Lady Eagles needed a big fourth quarter to advance past the Lady Pumas.

Forward Diana Logan (’12) and guard Tasia Butler (’13) each took the role of clutch player in the fourth quarter. Logan pulled North Point within six points of the Lady Pumas with an and-one basket, to which Wise responded with four fast points. Shortly after, a Butler three pointer pulled the Lady Eagles within four points. Then, with 82 seconds left, Logan went back to the free thow line, sinking both shots to pull North Point within two. A three pointer by the Lady Pumas was then aswered by Logan with one of her own, and the Lady Eagles were down by two with under one minute left.

Both teams traded one more score each, and North Point found themselves down two points with four seconds left. Forward Khaila Prather (’14) inbounded the ball to Butler, who ran down the floor and threw up a desperation three point shot. The ball hit the glass, and just like that, the Lady Eagles season was over. The Lady Pumas were the victors in the contest, winning a close one 64-62.