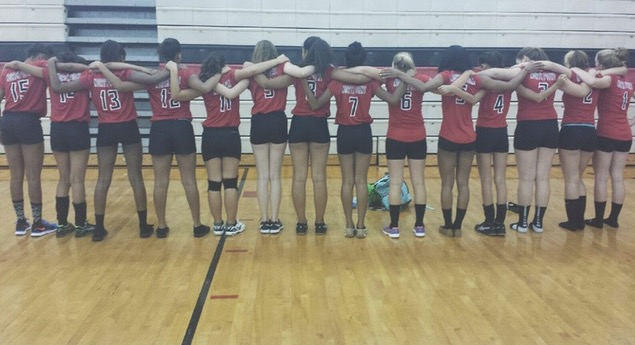 J.V. Volleyball faced off against Great Mills on Thursday the 15th. The girls played their hearts out, but Great Mills took the win 2 to 0. The game was very intense and both teams definitely brought their A-game. Kinsey Polk (’18), one of the four sophomores on the team said, “I think we played our best, the game was a close one and we’re just starting to really work as a team.” When asked what she thought they could improve on, Polk replied “I think we need to work on our teamwork. We have several strong players on the team, but we don’t stay in sync and it weakens us as a whole.”
J.V. Volleyball has had a tough season with 4 wins and 5 losses so far. Watching the game it was apparent that Polk was correct in her notion that the team needed more teamwork. J.V. did not communicate enough, and this led to people not working together and an overall confusion.
The team still played their hearts out despite it all and a few players really stood out in the game, showing a promising future for varsity next year. One of them being Ashley Bungcayao (’18), the starting setter for the team. Ashely’s composure and ball control really helped the team stay together; she is a natural leader. When asked about how she contributes to the team, Ashley replied, “I just try my best to support the girls in any way I can. I also know that I can’t expect others to do what I’m not, so I try to practice as much as possible, or at least get in some visual training by watching videos of professional volleyball players online.”
Ashley will probably become a great player due to her dedication and motivation, and she is not alone in that. Most of the J.V Volleyball team is equally hard working and has promising potential. Expect a great couple of games from them towards the end of the season, as well as an amazing team for next year’s Varsity Volleyball season.