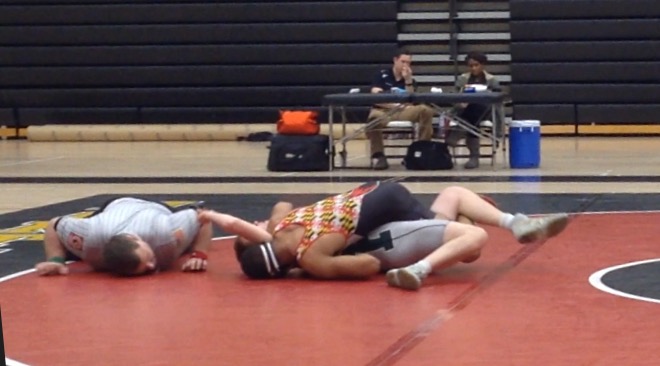 This Tuesday was a huge win for the wrestling team. North Point dominated the match winning 65 to 6. The team puts a lot of effort, and pride into their matches. They had to defend their turf. Every single match was a competition, they weren’t just going for points, every wrestler wanted to pin their opponent. The team came ready to demolish Patuxent and they did.
It was clear that North Point’s skill completely out matched Patuxent’s. Derek Nunn (‘16) commented on the match saying, “I think the match went well today. We were able to incorporate many moves we learned in practice into our wrestling today, which has improved a lot.” The team practices every week day from 3:15pm to 6:00pm. Their work ethic and determination is paying off. Nunn has an overall record of 19 wins and 2 losses this season and is looking forward to qualifying for the state tournament in March. Nunn isn’t the only one with big goals though. Elijah Griggs (‘17) also said, “I look forward to winning SMAC, winning regionals, and placing in states, and wrestling in nationals.” These are big goals for the season, but with the amount of work Griggs puts into wrestling they are achievable. Griggs currently has 17 wins and 4 losses this season.
The team is having a great season this year, but there is always room for improvement. Nunn says “I notice too often people tend to start to give up and slow down, which is a no-no in wrestling.” Blake Evans (‘16) a varsity player with a record of 19 wins and 2 losses commented that, “the team needs to improve on staying persistent”. Ryan Shoemaker (19’) nicknamed “Shoe” added the team needs to work on, like Nunn said being persistent, don’t let the other guy wear you out.” Listening it became apparent that the team needs to work on their endurance during a match, whether it be holding down the opponent long enough to pin him, or fighting against being pinned long enough to either escape, or the clock runs out.
The wrestling team is on their way to achieving big things. The team has big goals, but they understand their weakness, and if they can overcome them, then this will be a great season to watch. Come see their next home match against Thomas Stone on January 14th.