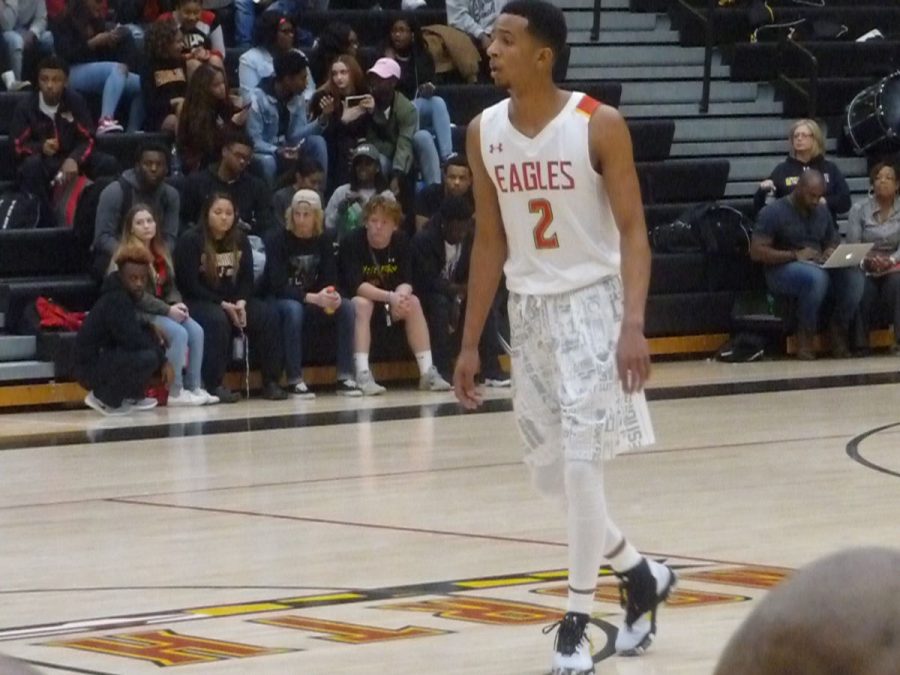 North Point’s 2016-2017 Boys Varsity Basketball Team is a very young group. Since the class of 2016 graduated, the group this year is composed of four juniors, four sophomores, and one freshman. However, there are five seniors on the team as well, led by captain and shooting guard Jalen Gibbs. The 6 foot 4 170 pound guard has been a force for the Eagles this year. Gibbs has been on varsity all four years. Gibbs for sure sees more and more minutes on the court now that the seniors from the past few years have graduated and moved on. Gibbs has been nothing short of impressive, and when you look at the numbers, you really see how great he has been. Gibbs is averaging 31 points, 10 rebounds, 3 assists, and 2 steals per game. Gibbs is known to fans for his amazing three-point shooting. If Gibbs has enough space when he releases the shot, there’s a pretty good chance it’s going in. Gibbs has also shown much improvement as the years have come and gone. When he was asked how he mentally prepares for games, Gibbs said “I just try to stay relaxed and think positive about how I’m going to play.” Gibbs has been playing basketball for most of his young life and says that his father has had a huge influence on him both on and off the court. “He’s always been there for me and he has also been so supportive for me.” Every team, no matter the sport, has a rival. Rivalries build over time and for Gibbs and his teammates, Westlake High School is that team. The two teams really bring out energy in the fans and the players on the court. Things can get chippy at times between the two teams. North Point and Westlake have had some great contests in the past. When asked if he changes the way he plays if he’s facing a rival team, Gibbs said, “No team changes the way I play the game. I play hard everyday to rebound and try to score for my team.” Gibbs plans to continue basketball after his high school career. He has been so reliant and clutch for this team and is a great teammate. Gibbs in the last home game against Crossland, became North Point’s boy all time scoring leader. That is a great achievement for a great player. The hard work and the dedication that he put in day in and day out showed how successful he has been as a player here at North Point High School. Jalen Gibbs, without a doubt, has been a great basketball player and has more left to show for us.