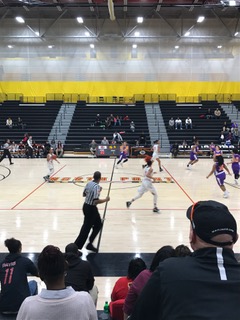 The North Point Girls Varsity Basketball team has been on fire this year. They have been playing some wonderful basketball. The Eagles have raced to a 16-2 record and are on a 1o game winning streak. They continued their great play as the Eagles defeated the McDonough Rams 83-29 on Friday night to improve to 16-2 on the season.

The Eagles offense exploded early and they really never looked back. Necole (CoCo) Hope, Senior captain, led the way early in the first quarter. Hope was able to get open looks and when she got them, she was nailing them one after the other. The Eagles took a 20-7 lead after the first quarter, establishing dominance on both ends of the court. McDonough came out in a 3-2 defense. But that wasn’t effective as the Eagles offense went to work. Freshman Guard Synia Johnson had a great performance as she finished with 21 Points, 7 Rebounds, and 6 Assists. Johnson and Sophomore guard Latavia Jackson were on fire throughout the contest. The Eagles’ overall speed really broke down the Rams, who started with just 7 players and ended this game with 6 following an injury to Rams player Reed Butler.  Hope also left the game late in the second quarter after she appeared to come down awkwardly on her leg. Despite the injury, the Eagles had a 46-15 lead after the first half and that was just too much for McDonough to keep up with. The Eagles came out of halftime without Hope, who didn’t return to the game. But the Eagles didn’t slow down offensively and kept up the great play. The Eagles outscored the Rams 22-7 in the third quarter to maintain their lead at 66-22 heading into the fourth quarter. Hope talked about what it was like to watch her team be so successful. “I’m very glad they were able to execute the plays and get open looks. This team has come a long way and we really mesh well. I’m so proud of my girls,” Hope said. The Eagles also received steady production from Senior Aliyah Bullock with 19 points and Junior Camille Robinson chipped in 6 points as the Eagles cruised to an 83-29 victory. Head Coach Mike Serpone talked about what worked well for his team, saying, “We were able to create transition offense from the steals.” The win pushed the Eagles record to 16-2 on the year and extended the winning streak to 11 straight games. North Point will look to make it 12 straight games when they travel to battle the Cougars of Thomas Stone High School Friday February 10th, at 6:30 PM.