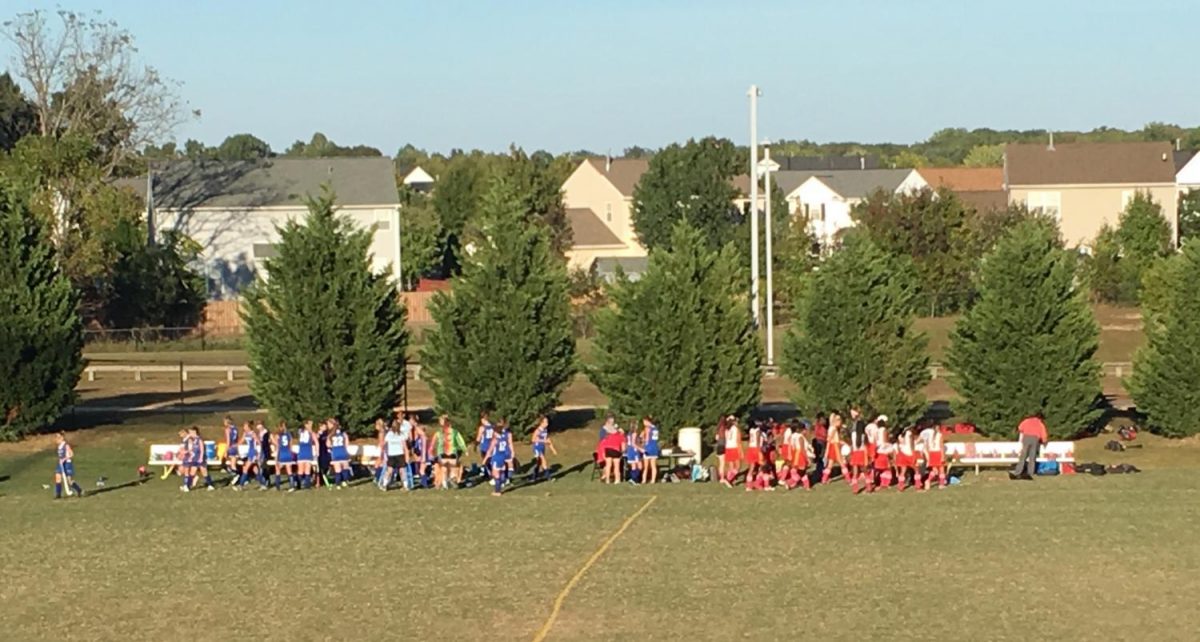 Coach Fair calls a timeout in the first half.

A cool breeze hit the bright green bermuda grass from the south as both teams huddled up, clacked their sticks together, and broke, ready for a battle. Three weeks prior, the Raiders had held the Eagles scoreless as they dominated offensively in a pre-season scrimmage. The entire field hockey team was ready to show they had the defense to keep a close game this time around.

At 4:06pm the first whistle sounded and a flick off the center pass sent the game underway. Quickly the Eagles found themselves on the attack with a long pass from Captain Olivia Simmons (‘18) to forward Sydnie Beall (‘18). The forward took a shot from 9 yards out that was blocked just inches from an early goal.

After this the Eagles found themselves retreating into a four on one scenario where goalie and captain Olivia Bell (‘18) came up with two saves back to back, ending in a huge stop for the Eagles. Five minutes in, Bell came up big again with another pair of saves coming off a Raider’s cross directly in front of the goal. Bell posted incredible numbers, putting up 28 saves over the course of the game on 39 shots with only 6 goals allowed. Following the game, the veteran goalie commented that it might have been a record amount of saves for her, and it truly showed. Bell went on to remark that she is “always ready for a great back and forth game against one of the better opponents in the league” and that she “is happy to defend her home field.”

The defense wasn’t only strong from their netminder. The Eagles held the Raiders scoreless for the first ten minutes of the first half. Following a flurry of Raider’s goals, coach Sandra Fair called an Eagles timeout. During this timeout the Eagles regrouped and seemed to put the past behind them. Another senior Ayanna Bell (‘18) said “[their] biggest strength as a team is camaraderie.” The team chemistry showed as North Point banded together to hold the Raiders scoreless for the following 15 minutes.

Only two minutes after the Fair timeout, Simmons (’18) was awarded a free hit, which she cleared upfield to speedy forward Katie Klahr (‘18). Klahr controlled the bouncing pass and looked up, then crossed the ball into the center to assist Beall (’18) on an Eagles goal! Klahr said there were a million thoughts racing into her head when she saw her teammate streaking free and she “just wanted to get that ball as close to the stroke line as she could.”

This goal seemed to take the wind out of Leonartown’s sails; they only scored twice in the following 49 minutes. North Point’s defense stepped up big after the early timeout with a score of 2-1 in the rest of the game.

The majority of the Eagle’s lineup are veterans and seniors, but they seem happy even if the 6-1 outcome of the game didn’t turn out in their favor. Olivia Simmons noted that as a captain she just wants the team to continue to progress and “keep on working on getting open and staying positive.” The Eagles suffered a few missteps early, but if they continue to play as they did after the turnaround, they will be a fierce competitor in the postseason.