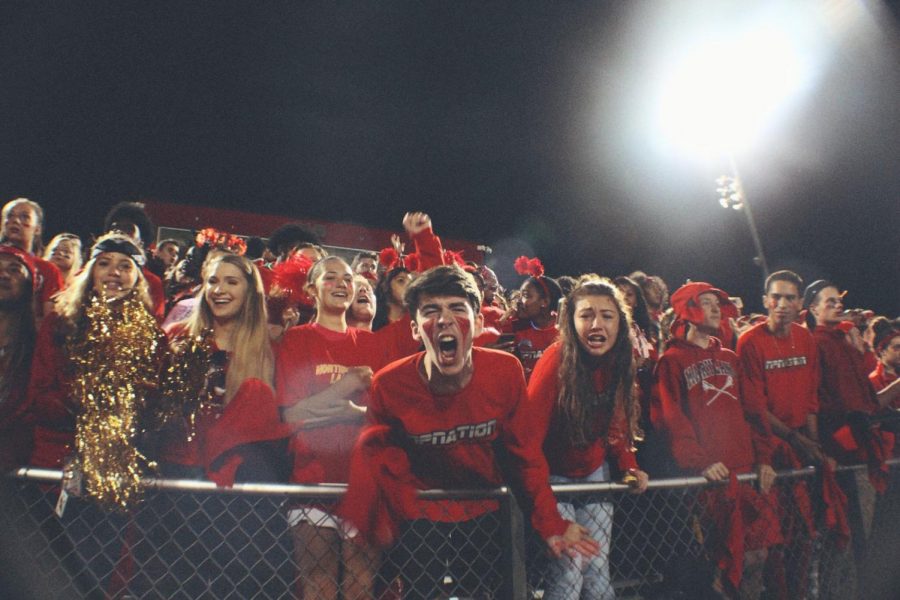 Student Section during the homecoming game

North Point’s Homecoming week was an extravaganza as the school showed heaps of school spirit that led up to Friday’s game against Leonardtown’s Raiders. The Eagles kicked-off the game with a touchdown within the first five minutes. Then to add insult to injury, as soon as the Raiders had possession, the first pass was picked off by senior Zach Doss. “Stay down!” Doss said after celebrating with teammates.

On that same possession, Senior Joshua Crumb ran it into the end zone, increasing the lead to 14-0. On the ensuing drive, the Raiders’ quarterback threw another pick to Chelen Garnes, who returned it for another Eagles score, making the score 21-0 before the Raiders knew what hit them. The crowd was getting into it, chanting “C4 C4 C4 C4 C4” and the team was getting hyped. The fans were in for a good game, to the dismay of Leonardtown. The drubbing of the Raiders had just begun.

Everything continued to go right for the Eagles offense, as Crumb, Garnes and senior Quarterback Jemichael Jones put up over 300 yards of offense while barely breaking a sweat. The Eagles special teams even got in on the action, as junior Jacob Tuiasosopo blocked a Raider punt, which was then returned for another score by Crumb. Additionally, the Eagles showed why they’re the number one ranked defense in the conference, as they held the Raiders scoreless until 3:10 remaining in the game, when they finally kicked a 34-yard field goal to break-up the shutout bid. Mercifully, as time expired, the scoreboard read Eagles 62, Raiders 3, and the celebration was on. The Eagles stormed the student section to celebrate victory with their classmates. Homecoming week was officially a success.