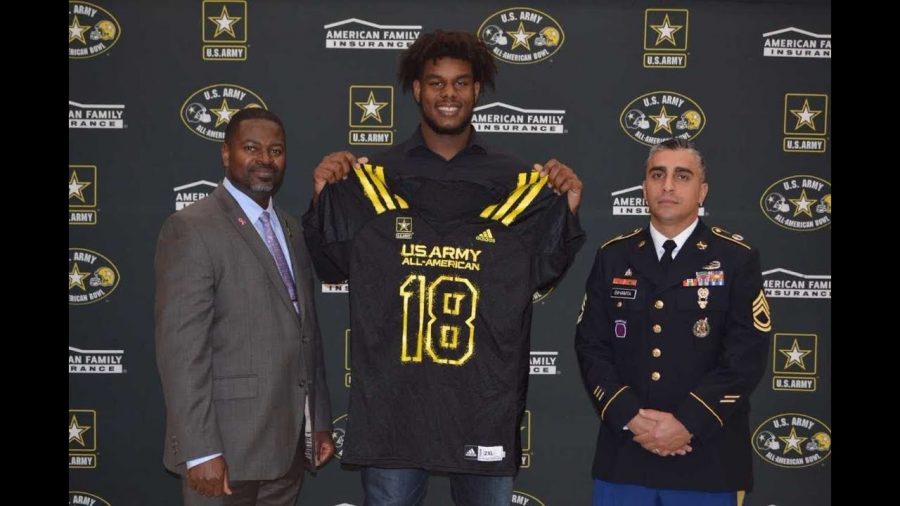 Maryland. Penn State. Ohio State. These are just a few of the college football powerhouses that have offered senior Rasheed Walker a scholarship. Walker, a 6-6 300 pound offensive tackle, has 27 scholarship offers in total, all of which are from D1 schools. He is a 4-star recruit and has even attended the Nike opening combine. His most recent accomplishment: being invited to the U.S Army All-American Bowl.

The U.S Army All-American Bowl is a prestigious high-school football all-star game. All players that get invited are top recruits. The all-star game has produced many NFL stars, including Odell Beckham Jr, Adrian Peterson, Ezekiel Elliot and many more. Every year, members of the Army go to the high schools of recruits and have a ceremony where the player invited receives his jersey. Recently, Rasheed Walker had his ceremony. “Its pretty good. My hard work has been acknowledged and I get to compete with the top recruits in the country,” said Walker.  At the ceremony, Walker was presented with an honorary jersey that had his class number on it.

“He’s matured both as a student and an athlete, which has prepared him for future opportunities,” observed head football coach, Coach Petre. Walker has created lots of opportunities for himself. He has been going through the recruiting process his last few years in high school and it’s led to lots of schools trying to earn a commitment from him. “It’s been fun the past few years because you get to explore new things and get new experiences. For example, you get to go to big college football games like the Ohio State-Penn State one I just went to,” said Walker. Being such a sought after recruit helped him earn an invitation to the Army game.

The U.S Army All-American Bowl is scheduled for Saturday, January 6, 2018 at 1:00 pm. It will be airing live from San Antonio, Texas on NBC. Tune in to watch North Point be represented with the best of the best.