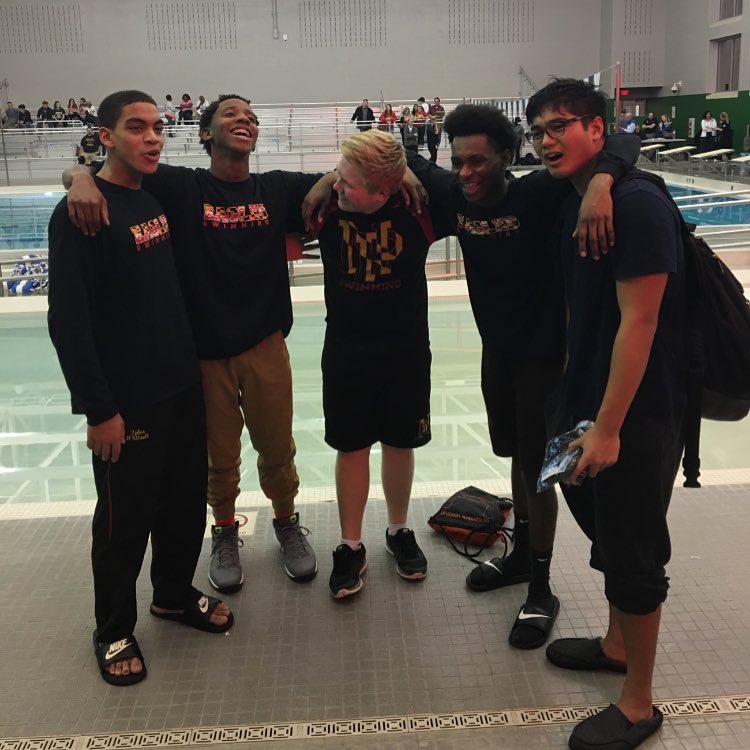 Nobody’s perfect… and no one truly is, but in the 2016-2017 season, both the men’s and women’s swim teams went for a pair of perfect records at 13-0. This year, they both compete to do even better if that is even possible…

History: Last year the boys gained their best record since 2013 and broke 7 out of 11 of the standing team records from the previous season. They lost the SMAC meet by just a few points. This season they look for their first SMAC title since the 2013 season.

Strengths: Strong core of returners. The men’s team has no shortage of veterans with 5 Seniors including SMAC champion breaststroker Tyler Whitsett, members of the record-breaking medley relay backstroker Dariusz McKenzie, and freestyle anchor Kevin Rohrbaugh, as well as distance swimmer Alex Booth and an all-around swimmer Emmanuel Aggrevante. Overall, the boys will stay in the hunt because their core is returning for their 4th run at the SMAC title and know what to expect in a grueling season.

Weaknesses: Depth, for the second year in a row the NPHS boys swim team keeps fewer than 20 swimmers. This may not be a problem, as they won the Leonardtown meet (their closest of the year) with fewer than 15 boys active.

Key Loss: Arguably the best swimmer from the 2016-2017, Lawrence Sapp is not back this year. He broke 5 individual records for North Point and was a part of one relay that also broke a record. Sapp has continued his swimming career this year, even taking a Paralympics GOLD Medal in the S14 100m Backstroke in a time of 1:06.42

Outlook: Overall, there is a belief that this team is not as strong as last year. With a strong senior class, and a growing base of supporting swimmers there is no way to count NP out of another 13-0 year. Junior swimmer Will Micknick (’19) even commented “We’re thin [in numbers] but we were thin last year, we’ll get it done”

Strengths: Depth and team chemistry.  The team is made up of mostly junior and senior girls which bodes well for team chemistry and timing on relays. The core of Junior girls is ready to take one of the largest women’s teams to their second undefeated record in two years. Overall there are enough swimmers to fill every hole in the meet schedule.

Weaknesses: Inexperience. Although most of the girls that are on the team were here for the 2017 Championship win, most of the core of the team is only just now beginning their 3rd season as an Eagle. The hope is that the momentum of last season just carries over into another SMAC win.

Key Loss: Class of 2017 Captain Carla Arquero graduated, taking with her a strong swimmer in backstroke and relays. Luckily Junior Sydney Marohn-Johnson looks to step into her previous teammate’s shoes. At the 2017 SMAC meet, Arquero took 2nd in the 100Back and Marohn-Johnson took 6th behind 5 seniors, giving her a good shot at gold.

Outlook: The girls are the strongest they’ve ever been. They are hunting for a second SMAC title and have good odds of winning it. Overall, if they continue training and working together nothing will stand in the way of the wrecking ball that is the NPHS Girls Swim team. Senior and newly elected captain Shelby Green even said “As long as we keep our cool and continue to work together, we’ll try to do the same thing as last year”

The meet schedule for the year can be found at: http://www.ccboe.com/index.php/high-school-swimming-information