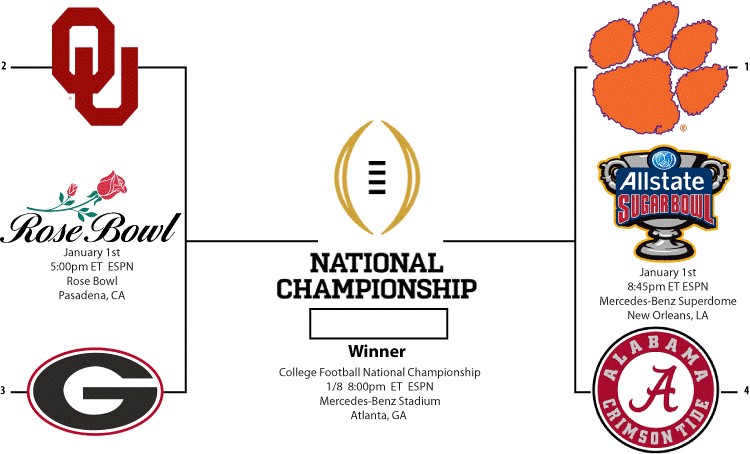 The bracket for the 2017-18 NCAA College Football Playoffs

Entering the fourth year of college playoffs for the BCS championship, the competition is incredibly stiff with a combined record of 47-4. The teams, Clemson, Oklahoma, Georgia, and Alabama, show the current domination of schools from the south over the northern teams of Penn State, Wisconsin, and Ohio State in the recent state of College football. These games kick off New Year’s Day and the championship is on January 8th.

The first game is the Rose Bowl, played between the number 2 ranked Oklahoma Sooners and the number 3 ranked Georgia Bulldogs on Jan. 1 at 5pm eastern time. At this point, Oklahoma is the favorite, fighting a thin spread of 1.5 points, but that could change all the way up to game time.

Oklahoma and Georgia are storied colleges with phenomenal football programs, but surprisingly have never met on the gridiron. Their first matchup pits the high-powered passing offense of Baker Mayfield and the Sooners against the systematic defense of Georgia coupled with one of the best two-pronged rushing attacks the NCAA has ever seen. Georgia’s defense is able to read and react while maintaining simple check down defense that can free up defenders to make plays all night without getting too deep into the secondary. The Bulldogs have only allowed 172 points, which is an average of fewer than 14 points per game… they’re tough to score on. This presents a unique challenge for a top 10 NCAA quarterback of all time. Mayfield has won three straight Big 12 championships, won nearly 40 games as a starting quarterback, has a 71% completion rate this year, and in his college career, he has passed for well over 14,000 yards. All in all, Mayfield and the Sooners are tough to contain once they start rolling. All things considered, the Sooners are my choice to win it with a score of 27-17, but it wouldn’t be out of the question to believe the Bulldogs hold Oklahoma to a goose egg and walk out resting on the laurels of their defense.

Senior football player and enthusiast Xavier Prince foresees a Bulldog victory by an eight-point margin at 21-13 Prince (‘18) went on to say, “Oklahoma is hot, but not hot enough to roll over Georgia. That defense is tough.”

The second matchup is the Sugar Bowl, played between the number 1 ranked Clemson Tigers and the number 4 ranked Alabama Crimson Tide on Jan. 1 at 8:45pm eastern time. At this point Alabama is a 2.5 point favorite, despite being ranked last in the playoff of 4. This however, is also subject to change along with betting patterns.

This game is a rematch of last year’s BCS championship where Clemson slighted the football juggernaut that is Alabama’s hopes at taking a fifth BCS title in the last decade. Clemson; the returning champions, boast a quarterback with 11 touchdowns rushing and 13 in the air as well as a receiving core with three receivers from a defense’s nightmares. The offense has a pair of backs going for 744 and 659 yards rushing as well as a QB with 646 yards himself, not to mention two more backs who’ve gone for over 520 yards combined. The run isn’t Clemson’s only staple with 3 receivers catching for 659, 571, and 502 yards respectively. Their defense isn’t bad either. Dorian O’Daniel epitomizes Clemson’s hard nose defense with 4 forced turnovers on the season and over 80 tackles. Alabama, on the other hand, boasts a steady strong defense with only 126 points against in 12 games, and an offense that averages just barely under 40 points a game. Alabama has so many stars that it’s more worthwhile to speak towards what Nick Saban has done as a coach. 4 BCS titles since 2009. That’s it. Alabama is a team full of winners who won’t give their beloved trophy to the same team twice in a row that easily. Taking all that into account, I see a high scoring, big-offense game with a predicted score of 42-38 in favor of the reigning champs at Clemson University.

Sophomore Liam Perella predicted a 21-18 Alabama victory, even commenting, “I think it will be a field goal breaking the tie with the clock running out.”

With the new year our predictions will be tested and the final teams will be left to battle it out. All teams have lost once so no record is flawless, however only one team will leave without getting a second loss.