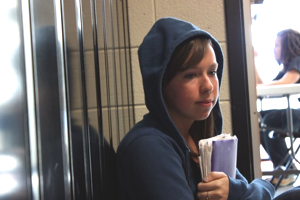 A pale faced student trudges down the hallway, clutching his books close to his chest. He
keeps his head down and his eyes low. He avoids making eye contact with anyone who walks
by him and mumbles a simple ‘hello’ to those who greet him excitedly. He spins in his locker
combination, puts his books away and grabs his brown bagged lunch. Suddenly he hears heavy
footsteps approaching him, and his knees quiver at the familiar sound. He turns around and
comes face to face with another student who has a few inches and pounds on him. “Hand it
over,” the student growls, motioning to the lunch in his hand. The pale faced student quickly
hands the brown bag to the bully and backs away in fear. The bully grabs the student by the
collar and shoves him into the open locker. By-standers point and laugh while he closes his eyes
and wishes he could disappear.

“I was bullied in Elementary school by this girl named Rosa. She was big, I was little, and
she didn’t like that so she threatened to beat me up,” shared English teacher, Mrs. Burch. “I hid
from her everyday but eventually told my mom and the other teachers at school.”

Webster’s Dictionary defines bullying as the act of some “blustering, quarrelsome,
overbearing person who habitually badgers and intimidates smaller or weaker people.” It is a
very serious issue that millions of kids face daily at school, on the job and even on the streets.
When people think of bullying, they imagine an encounter like the one previously laid out.

However, bullying is no longer only an act of physical abuse. It is also mental and verbal.
In today’s time humor has gone to a different level. One that is blustering, quarrelsome, and
overbearing, which makes it hard to label something as bullying, when it could be a crud joke
between peers.

Bullying can take a relentless toll and have very sever affects on a person’s psychological
and physical health, causing problems that can follow kids into their later years.

Studies by Kids Health Online Magazine show that kids who are bullied are at risk for
low-self esteem, stress, depression, anxiety and even suicide when they got older. To test this
theory, a couple of teachers and students were asked about their experiences with bullying and
the affects it had:

“I was bullied when I was little. I was more of tomboy and I played pee wee football.
All the other girls made fun of me for it. It made me feel different so I quit and went on to play
T-ball because it was more accepted among the girls. I still think back and wonder what would
have happened if I had stuck with it,” Jennifer Patterson (’11) said.

“My brother was bullied. The kids on the school bus would pick on him and call him gay.
Even though he was, the name calling made him really angry. He’s still has anger issues because
of it. I think because he had to hide his sexuality for so long for fear of being bashed, but he’s
working on it,” shared Mrs. C. Smith.

“I was bullied in Elementary school. It’s hard to describe the feeling I had every day. It
was worse than fear,” explained Jessica Fine (’11). “It was the feeling of not knowing what to
expect when I walked into the classroom.”

Though bullying should never be condoned, it doesn’t always have a negative effect on
people. It could possibly put a drive in the victim to overcome the abuse. Mr. Serpone, a social
studies teacher, is a testament to this statement. “I used to be picked on because I was the small
white kid at the basketball tournaments. I let my skills do the talking and made them eat their
words,” he shared. “It made me want to do better.”

Victims of bullying are not the only ones at risk for problems. According to Kids Health,
one out of 4 school bullies will have a criminal record when they reach adulthood because
bullying is violent behavior that ultimately leads to more violent behavior if it is not stopped at
an early age.

Art teacher, Mr. Ball shares what scared him out of bullying. “I was in high school and a new
girl had transferred into my social studies class in October. She was heavy set and wore glasses. I
would always have something to say when she’d come in, usually about her weight or her looks.
I’d have the whole class laughing. One day, she wasn’t in class. I asked someone where she was
and they said, ‘You didn’t hear? She died in a house fire.’ I felt bad and I still do. I know I hurt
her feelings. I regret never getting the chance to say sorry because she didn’t do anything to me.
I provoked it, and just to get a few laughs. I never got to know her. I tell kids and students the
story a few times a year to keep them from making the same mistake,” he said emotionally.

Most people hesitate to speak out against bullying because it can be hard. It may not
seem like it, but chances are that the other students witnessing the bullying behavior feel as
uncomfortable as the victim. But, bystanders should know that their being neutral is really siding
with the bully. Though it may seem like their peers have turned their backs on them, the victims
of bullying are never alone in their fight for justice. Witnesses and victims of bullying should
work together to stop this serious issue. The best way to combat bullying is by getting involved
in and supporting the schools anti-bullying programs.