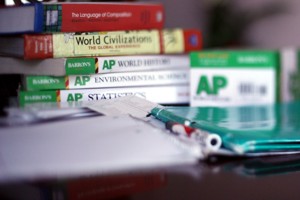 Most North Point students take a set of moderately challenging courses over the school year- a few honors classes here and there, and perhaps an AP (Advanced Placement) course thrown into the mix. But for an elite group of overachievers, schedules like that are too much a walk in the park. These students, virtually all juniors and seniors, regularly take as many AP classes as manageable, which can be anywhere from four to six. Combined with the stresses of extracurricular activities, college admissions, jobs, sports and the other commitments of life as a high schooler, it’s a wonder that these AP ironmen and ironwomen find enough hours in the day.

Every overachiever has a different motivation that drives them, pushing them through hours of homework, studying, and projects. “I want to have time in college to study abroad, so I want to get the majority of my entry level courses out of the way,” said Natalie Griffin (’12).  This points to one of the major benefits of AP classes: college credit. Assuming a student gets a high score on the National AP Exam, he or she can skip the equivalent intro classes as a college freshman.

Other students have more immediate reasons for overloading their schedules. “I want to get into a top school…and I’m shooting for valedictorian,” commented Cayley Dymond (’12). Competition is heavy among the top echelon of students nationally for spots in selective colleges and here at school for the highest class rank.

Griffin and Dymond are taking six AP classes each, ranging from European History to Physics C, all while playing on the soccer team (Griffin) and being in the Engineering STI (Dymond), among other things. A common sentiment among AP students is the importance of prioritizing – otherwise, their work pile would never see an end.

Bobby Keim (’13) is a junior taking AP Calculus AB, which puts him a few levels ahead in math in comparison to the average student. Keim also emphasized the importance of class rank and college admissions in his decision to go above and beyond academically. “Most nights, I’m up past midnight,” he said with a grimace.

Do these overachievers urge all North Point students to take similar course loads?  “People have to do what works for them,” said Griffin. According to Dymond, “You have to know your limits. Six is a little crazy.”