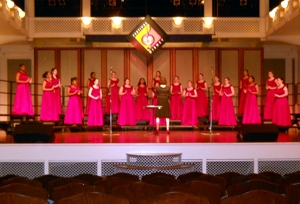 On Wednesday, April 11th 114 students from North Point’s Music Department boarded three coach buses and began their venture to Disney World in Orlando, Florida. The department competed in Disney’s annual Festival Disney Performing Arts Competition. The music department took members of two choirs, the Chamber Choir and the Eagles in Harmony Choir, and members of the Orchestra and Symphonic Band.

While on the trip the students got to experience all four of the Disney theme parks: Epcot, Hollywood Studios, the Magic Kingdom and the Animal Kingdom. First time Disney goer and senior Brooke Hayes took in the experience with a bright outlook. “It was a wonderful way to end my senior year,” added Hayes. The students were mesmerized by the new venues they were able to perform in. The orchestra and band performed in a theatre in Hollywood Studios. The Chamber Choir was given the opportunity to perform at the Disney Contemporary Hotel and Resort. The Eagles in Harmony Choir performed at Saratoga Springs Resort and Hotel.

Each ensemble performed three pieces before a panel of three college music professors from various colleges, such as West Virginia University and the University of Mississippi. At the end of the ensemble’s performance one of the judges would come up to the stage and give the students pointers and tips. “Being adjudicated and judged by professionals allotted me the opportunity to learn from the best and perfect my performance skills,” said Brittney Hicks (’12).

On Saturday night, all the ensembles that competed in the competition attended an awards ceremony in the “Lights, Motors, Action!” stunt show arena at Hollywood Studios. The Chamber Choir and Eagles in Harmony choirs earned the highest rating possible of superior. The Chamber Choir also won the Best in Class award for the madrigal category as well as first place overall in the show choir and a cappella choir categories.  “It was amazing to show off all the hard work North Point puts into its musical program,” commented D’Andre Davis (’12).

Many students saw the great opportunity that this trip gave them and were highly appreciative for it. “This trip was an amazing opportunity for each Orchestra, Band, and Choir member to have fun, bond, and showcase our amazing performance abilities,” added Hicks.

For the students that performed in multiple ensembles they earned more critiques and performance experience, as well as a chance to grow closer to the members of their ensembles. “As a part of three ensembles it improved my friendships I have with everyone in all three,” said Tom Valdez (’12) a member of the Orchestra, the Symphonic Band, and the Chamber Choir.