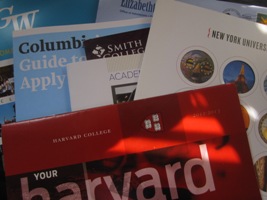 Every year, fall brings with it a few distinct things: a new school year, the ghouls and ghosts of Halloween, vibrant foliage, and most importantly, college admissions season. For seniors, the process of gaining admission to the place where they will spend the next four years of their lives is undoubtedly daunting. But though the process matters greatly, it does not have to produce stressed out seniors. With some planning and the following guidelines, the admissions process can be smooth, and even fun.

The Early Bird Gets the Worm

The last thing any senior wants is to rush college applications and essays because they procrastinated. In college admissions, procrastination can be fatal. Before fall arrives, in late summer, students should create a Word or Excel document containing three things: the schools they are interested in, their deadlines, and their admissions requirements. The latter cannot be stressed enough. Some schools have very streamlined applications while others require SAT subject tests, CSS profiles, extended essays, major and scholarship specific applications, and the like.

“I made a chart with all the location, tuition, and deadlines on it,” said Ameer Patel (’13). He started his spreadsheet two years ago, and now, it has become very useful.

Students and parents are perennially confused on the distinction between early decision, early action, single choice early action, and regular decision admissions programs. Typically, all early deadlines are on November 1, while regular decision applications are due in early January. Early decision is binding – students sign a contract to attend that school if they are admitted. Early action is not binding. Students can apply by November 1 and receive a notification in December, but are free to apply to other schools or refrain from enrolling at their early action school. Single choice early action, however, allows students to apply to just one school early, yet without a commitment to attend if accepted.

For the most part, college applications are facts and numbers: class rank, G.P.A., SAT /ACT score, the number of Honors or Advanced Placement classes taken. The essays are the only place where students can put their voice into the application and distinguish themselves from the sea of people with similar scores and grades. Students should avoid clichés and write in the most genuine way possible.  For example, the “how my grandfather/grandmother/mom/dad inspired me to become a better person” essay may be a bit overdone. However, students shouldn’t write on an obscure topic just for the sake of doing so – admissions officers will see through this ploy.

Mrs. Kirby, an English teacher, adds, “Write it way ahead of time…I just think it’s too much to gamble with.” Also, multiple people – friends, parents, teachers – should read a student’s essays to catch errors or give feedback.

Don’t Get Caught Up

There are thousands of colleges in the United States, of all sizes, personalities, and styles. No matter what, students must remember that they are bound to find the place for them, where they will grow academically and personality. Even if there are bumps along the way, with all likelihood, things will work out in the end.