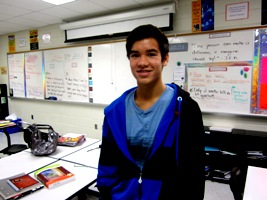 When browsing the Windows Phone App Store, one might come across the company Fisher Developing and its collection of popular apps, from Ringtone Factory to Angry Birds Uncovered. One might assume that this company is run by some tech gurus in Silicon Valley who have long careers in computer programming. Those assumptions are wrong. In fact, Fisher Developing is the project of Austin Fisher (’13), a North Point engineering student. With nine apps on the market, Fisher has turned an extracurricular interest in programming into a successful enterprise.

Fisher began his foray into the world of cell phone apps during a time when most students are lounging poolside or watching movie marathons on Netflix. “I taught myself C# [a programming language] with online samples two summers ago in place of getting a job,” Fisher commented. “I had some success after a while and decided to continue with programming. “

The most popular of Fisher Developing’s apps, Angry Birds Uncovered, has been downloaded nearly 1.5 million times and rested among the top ten apps in the Windows Phone store for a time.  Fisher’s other apps include Sorting Hat, which assigns users to one of the four Hogwarts houses based on a questionnaire, and Outlines, which is a study tool. There is also an “Uncovered” app for the game Doodle God and KEYmoji, which adds emoticons to users’ keyboards.

Fisher chose to develop for Windows Phone, as opposed to iPhone or Android, because the former requires developers to buy expensive development tools and the latter is not “well organized.” Plus, Fisher already owned a Windows Phone, making the choice even easier.

Fisher’s friends are aware of his double life as a programmer, but many of his classmates and teachers do not know of the developer in their midst. “I don’t go around just telling people,” Fisher said, with a note of sheepish pride.

One of those friends and a fellow engineering student, Henry Buntz (’13), stated, “I am proud of my friend’s ability to learn and produce a commercial product on his own.” He continued, “I’m not jealous, though. Well, maybe a little bit.”

In the future, Fisher plans on getting a degree not in computer science, but electrical engineering. He will work on making Fisher Developing sustainable while he holds a day job as an engineer. Eventually, Fisher wants his programming business to spread to Android, the iPhone, and the web. By the looks of it now, he is well on his way.