Randolph and Her Rhythm 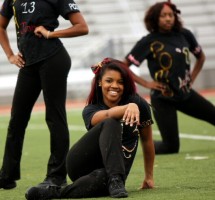 Ashlei Randolph (’13) is good at the sport she does. The dedication and time she puts into it are what makes her skills stand out. This sport does not require dribbling, running or shooting, but popping, locking, and dropping. Randolph’s sport is dance, and just like any other sport it requires sweat, hard work, and practice.

Randolph was not always good at dancing. When she was around the ages of six and seven she discovered that she did not even have rhythm. “At first it was because my sister did it (dance) at church, so I decided to join, but since I did not have rhythm I saw it as a challenge, so I stuck it out,” explained Randolph. Dancing was not something she was born with. It was something she had to keep working at. Some people were born gifted; others have to work harder to be on the same level.

Since her freshmen year, Randolph has been on North Point’s Poms Team and now she holds the title as team captain. Teammate Aaliyah Yates (’13) said, “She is an amazing captain. As a captain she helps keep our head on straight and when it comes to making routines she is always on top of her game and she gets the job done. As a teammate she is extremely helpful, if someone needed help I can honestly say that she would keep working with them until they felt confident.”

Randolph has been to competitions where her and her team would win first, second, third, and fourth places. At competitions, the team competes in different categories of dance like jazz, hip-hop, lyrical, poms, prop etc. If the teams place first, second, or third, then it can advance to the championship.

When it comes to practicing, Randolph does it everyday. If she has trouble with a certain move then she keeps trying until she gets it. She does not hesitate to ask for help when she needs it from either her family or friends. “If someone can do what I need help with then I try to get help from them,” said Randolph. Another way that she trains is running track; this keeps her in shape.

Dancing is something that Randolph wants to continue for a while, “I hope to dance in college, but I am not sure where things will go after that. I want to still dance after college, but not professionally.”

For Randolph dance is not just learning chorography and staying on beat; it is another way of self-expression. “It became a way of expressing me without using words. I learned to love the art and I have ever since.” Yates stated, “Ashlei is a great dancer, captain, and a great aspect of the team. I am so grateful to have her as my captain.”