The Effect of Dress Codes on Students 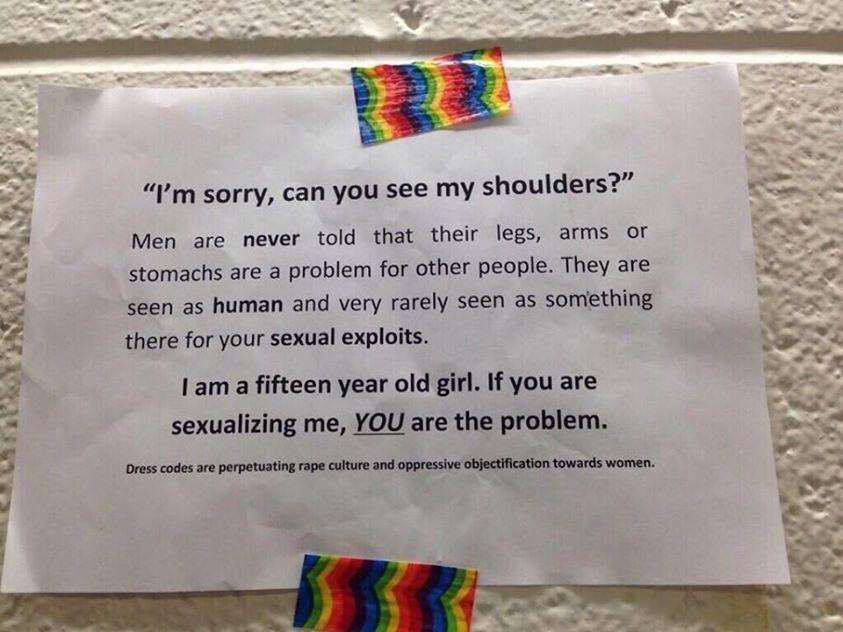 It is no question that most female high school students have some sort of problem with the dress codes. Not only fellow students, but most of America has complained about a certain bias being present in high schools when it comes to girls being punished as compared to boys.

Charles County’s Student Code of Conduct is fairly precise when it comes to its rules in regard to students’ dress, but those rules aren’t exactly prevalent inside of the schools. In conducting a poll of fellow students, out of twenty boys, only two had ever been dress-coded. Out of twenty girls, however, fifteen claimed to have been asked to change what they were wearing before. As you can tell, the focus is almost exclusively on female students. Females are the ones being punished, but many high school students would claim that males are also breaking the rules.

A student can’t walk down the hall without seeing a decent number of male students with their pants below their waist, their underwear in plain sight, but how often are they cited? There are even cases of male students wearing clothing that was specifically shown in the school’s PowerPoint of banned items, but not being spoken to.

So, what is the problem with just dress coding girls? Well, there’s many. Most would claim that when girls wear clothing that is against the rules, they’re distracting male students and staff. A lot of problems lie in that statement. When a girl is told that it is her responsibility to allow boys to concentrate on their schoolwork rather than on them, they are told that they should feel guilty for having a body. When a girl is pulled away from her school work to tell her to change, it’s implying that others’ education is more important than her own. The statement does not only affect women, however. It also perpetuates the idea that boys have no self-control, and cannot hold themselves back from the female body.

When it is assumed that it is the girl’s fault for distracting other students, rape culture is perpetuated and the idea that a rape victim is at fault because of what they wore. Rape culture is a setting in which rape is pervasive and normalized due to societal attitudes about gender and sexuality, as defined in The Sexualization of Childhood by Sharna Olfman. The idea behind dress codes is presumably to protect girls from being sexually harassed, but all that criticizing and punishing them does is make them feel guilty, and rape is never the victim’s fault.

Rape culture being prevalent in schools is not a new idea, either. In 2014, Emma Sulkowicz, a student at Columbia University was raped in her own dorm room. She then proceeded to carry her mattress everywhere she went to express the emotional weight put on her after the incident. Her case later went to a hearing, and she expected the university to side with her. However, the opposite happened and her rapist was deemed “not responsible” and remains at the school. The way Sulkowicz’s case was handled perfectly portrays how rape is perceived in our society. It isn’t taken seriously, and is, too often, pushed to the side with no regard to the victim or how these events wear them down.

Therefore, when girls are taught that their bodies are these sinful things that need to be covered for their own protection, they’re made to feel unsafe in their own physical form. The idea that rape is a victim’s fault and that the rapist, who is really at fault, shouldn’t be punished, is promoted.

Instead of teaching girls to hide their bodies, teach other students to keep their eyes and hands to themselves. Students wear shorts because it is hot, not because they want to impress or distract others. The dress code is an extreme that should be lessened. Should students be allowed to dress inappropriately? No. But they should be allowed to dress in a way that is comfortable to them without their intentions being deemed as sexual. The problem does not lie solely in the dress code rules though, the largest issue is that both sides break the rules, but only one is punished. If the rules are going to be enforced, enforce them equally.