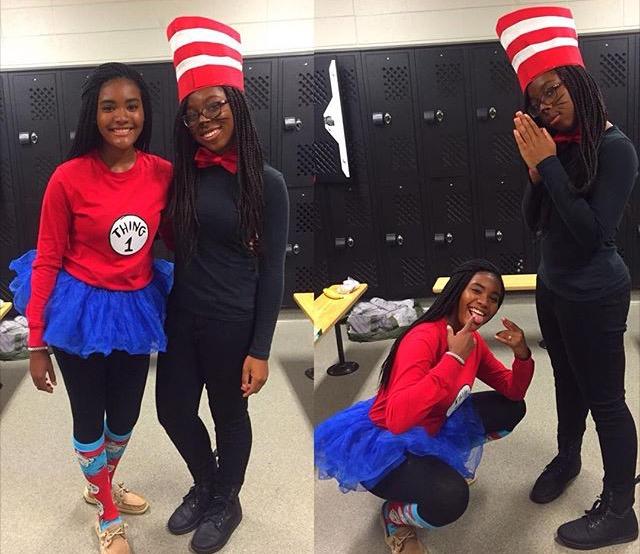 Character Day is a spirit week tradition. It is one of the most looked forward to days of the school year. Usually on the Wednesday of spirit week, students, teachers, and faculty are encouraged to dress up as some character. It can be from movies, books, and television, whatever. This is a pretty broad range of costumes, so it really gives the students an opportunity to go all out and have fun.
An overwhelming amount of spirit was shown on character day, Wednesday Oct. 20th. There were some of the most creative costumes of the decade. People came as almost anything they could imagine, such as food, movie characters, animals, and famous people! It was a really exciting day, filled with fun and spirit. One of the best costumes was from Chelsey Adedoyin (’17), who came as the cat from Cat in the Hat; she even got a friend to play along and dress up as Thing 1. Adedoyin said, “Character day is the best day of spirit week,” and “it’s the day we go all out for.” Adedoyin also made her costume by hand, which shows how much dedication she has. Her costume was funny, and brought back great childhood memories for the rest of the students.
This year’s character day had some of the most participation ever, especially from the graduating class of 2016. The seniors won the competition for class participation of character day by over 100 people! The seniors were definitely the most spirited class this year, as they should be, and really set the bar high for next year’s seniors.
Spirit week is all about having fun and bringing the school together, and that’s exactly what happened on character day. The bar is set pretty high for next year, but with the spirit this school has, it shouldn’t be too hard.