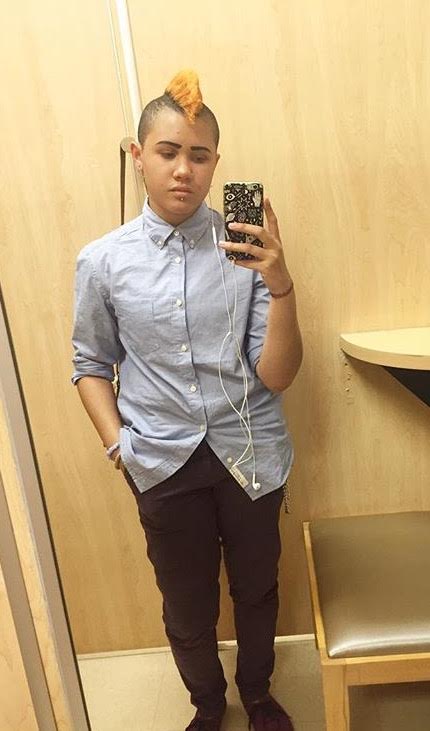 Being unique in a large school can attract both negative and positive attention. For Taylor Williams (19’), better known by his nickname of Scott, living a lifestyle that is considered archaic by many spurns a bittersweet feeling. “I get a lot of stares and that can be awkward sometimes, but for the most part, I get more compliments than I do nasty comments,” expressed Williams.

To gain a full perspective on his fashion, one must first understand the history behind the popular subculture he has subscribed to. For Williams, this particular influence stems from the “Punk” subculture that was first grounded in the United Kingdom, Australia, and the United States around the mid to late seventies. During the movement’s early days, various musical, philosophical, political, literary and artistic movements helped to shape it. Specific bands that are accredited for pioneering the subculture include the New York Dolls, The Stooges, and the Ramones. Additionally, popular themes that were associated amongst many “punks” included leftist/anti-establishment views, an aggressive attitude against societal conformity, and an overall support for individual freedom.

As the ideals and music of the subculture were gritty and unabashed, so was the fashion itself. “Growing up, I felt both curious, pressured, and perplexed by the typical molds of society. I guess I just related with the punk scene the most because I felt that the music talked about important issues that were, and still are relevant to me,” shared Williams. He continued, “Dressing the way that I do is an artistic outlet for me, as well as a way to represent my favorite bands and what they stand for. My Mohawk, pins, and D.I.Y. (do it yourself) clothes are a huge part of my identity, as well as my style and creativity.”

Later in the early eighties, the subculture began to diversify with the proliferation of factions such as new wave, post-punk, pop punk, hard core punk, no wave, horror punk, and street punk (just to name a few). In Williams’ opinion, all of these factions were imperative to the subculture as a whole and consequently, serve to influence the student’s fashion sense, taste in music, and political views. “I don’t just listen to punk rock. I really enjoy post-punk and indie groups such as The Smiths, The Cure, and Joy Division. When I think about what period of time I would want to live in, I’d definitely choose the eighties. If I’m being honest, I think it was the best time for both the scene and music in general,” Williams stated.

Conclusively, Williams stands by his core values in staying true to his identity and being himself. When he walks down the hallways of the school, some merely see an intimidating figure with a Mohawk and a spiked collar. However, the unique student believes that the summation of his identity and interests symbolizes an open mind, and for him, that manifests feelings of pride and empowerment.