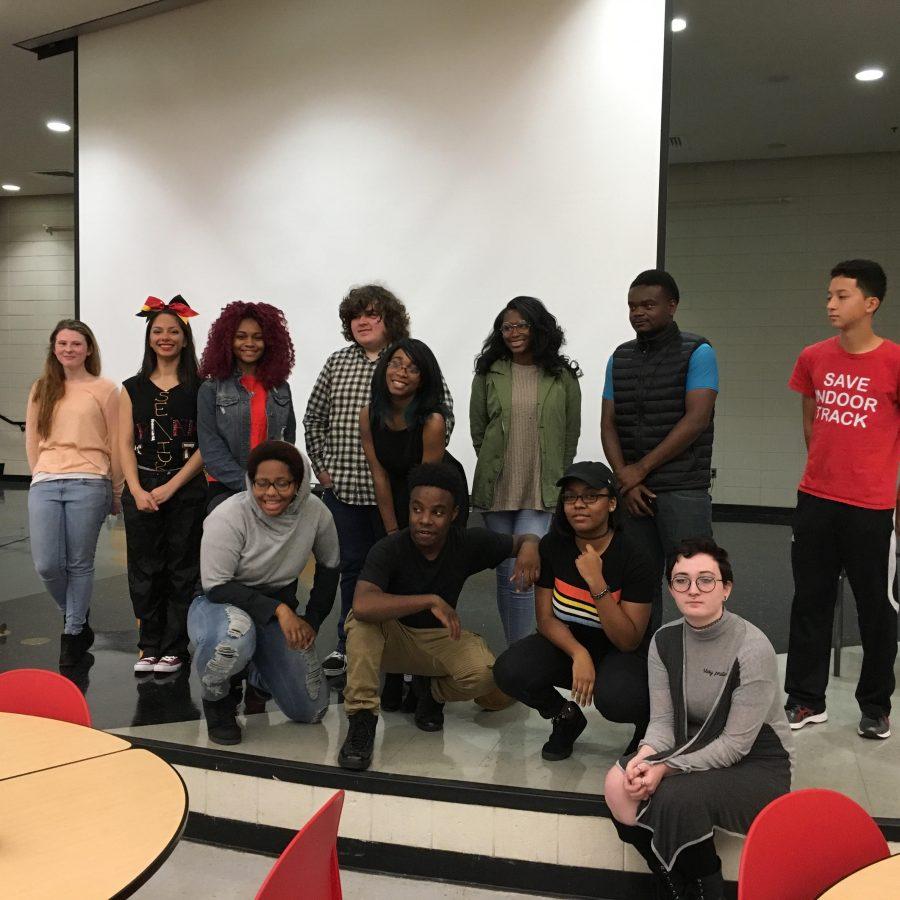 On Friday, November 18th, North Point hosted the county’s annual poetry slam, inviting students from around the county to express themselves through the art of poetry. Many who are not familiar with poetry slams would most likely misinterpret what a poetry slam is all about or wonder if being a part would be something in their interest. Walking in to the poetry slam and encountering a small crowd is expected. Most of the crowd were not even contestants. Despite a limited number of participants, the poetry slam was a mesmerizing evening that many missed out on. The crowd was especially quiet during the first twenty minutes of the slam until the first musician of the evening appeared on stage with his guitar. Immediately after setting up his amp, the crowd was instantly intrigued, many even picking their heads from their phones and sitting a little straighter in their seats. Chris Gilbert, a junior at North Point, explained that poetry club has a few musicians like himself and rappers. He has been “legitimately writing songs since his freshman year,” when he joined poetry club and has been singing since he was very young.  Poetry slams usually involve poetry in the form of spoken word, so it was interesting to see two musicians who showcased their work that night. There was also a rapper from St. Charles who performed with beats and background vocals prepared. He performed two songs that had many taking out their phones to record and livening the crowd once more. It may seem that following these musicians would be hard to follow, but there were actually many spoken word artists that kept the crowd deeply engaged and obviously spoke to many. Mr. Hoffman even said one of the poets who spoke about father and daughter bonds “almost made him want to leave and give his daughter a call.” The poet that followed, Senior Eagle Maiyah Morgan, also followed up on that poem tackling that same subject and fueling more enthusiasm to the crowd. The spoken words shared on stage were strong and even tackled more topics such as race, woman’s issues, cultural assimilation, discrimination, mental health, family affairs and many more. Senior Tabitha Harris from St. Charles did a powerful duet with a fellow classmate, tackling social issues prominent in the world. The performance was powerful and many from the crowd were energetic after hearing it. Despite the performance being her “first performance outside of class,” it will not be her last. Nailah Parrish, a Junior at North Point, shared powerful and moving poems in the first and second level of the poetry slam. She was one of the few who was not a newcomer to performing poetry live. Performing one poem memorized, unlike most others who performed, she has been into poetry for a long time, starting from being in chorus, to writing her own songs, to getting into poetry slams. She said that she liked the community around it being “people who had gone through things in life and sharing it poetically.” For Nailah, this was her first open mic at North Point, but she had been engaging in poetry slams at the youth open mic night at Busboys and Poets, hosted by the D.C.U slam team. She said the best way to connect with the audience is without reading off a paper when sharing her spoken words. Although the audience for the Slam was quite small, it’s normal for most poetry slams. Mr. Hoffman was very proud of his students’ performances and their talent. He said that they had been “feeding off of each other so a mixture of style is noticeable” and the “storytelling element” his students have is amazing for their ages, which range from freshmen to seniors. He was also ecstatic once the poetry slam was finally here, however the preparation process was a bit “frustrating.” However, he said that the participation and engagement from many of the club was a “breath of fresh air” because it’s “important for us to get our voices heard.” Mr. Hoffman, who is a published poet, is also hoping to expand the poetry slams and “hoping the poetry culture grows,” which starts with more people taking advantage of being heard through poetry.