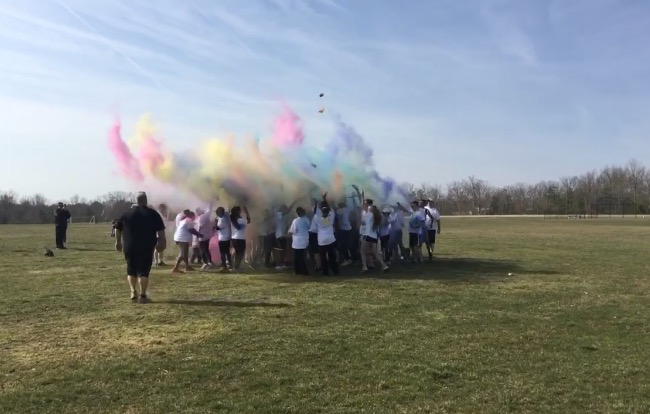 Just recently, on March 25th, North Point had its very first color run. A color run is a 5K where participants, as they run through a course, have colored chalk thrown at them so their white shirts become vibrant with color. The fundraising event was hosted by the Class of 2019. On the early Saturday morning, people began to line up to register for the event and to pick up their color run gear- a pair of sunglasses, a wristband, a color packet and a white t-shirt. North Point students, teachers, parents and other community members arrived to participate. “I liked how kids from different schools attended,” sophomore Mia Watson explains. As it got closer to the start of the race, everyone began to crowd by the starting line.

The race started and many began to run while others decided to walk. The people working the color stations were ready for the ambush of people. As they ran by, rainbow clouds began to color the sky. Colorful chalk coated the runners’ clothes, hair and faces. The course ran through North Point’s campus, so the runners got to go through a nice, scenic route. “The trail was nice and there were parts that I didn’t know North Point even owned,” Watson confesses. The runners and walkers were having a good time as they went through the course. “It [the color run] was funny, I got stuff thrown at me,” sophomore Erin McNeil excitedly explained.

By the end of the 5K, the participants were covered in colored chalk from head to toe. Their white shirts were decorated in bright pastels and everyone had smiles beaming on their faces. Then, everyone gathered together and threw their color packs in the air and the result was a rainbow shower in the sky. The color run was officially over.