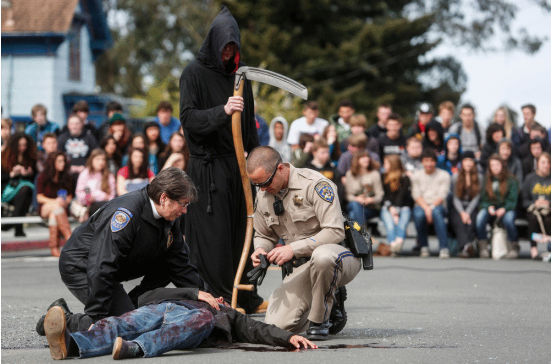 The "Every 15 Minutes" program in action.

Every 15 minutes a teenager dies from drunk driving. The “Every 15 Minutes” program was a very emotional event that illustrated the potentially dangerous consequences of drinking and/or texting while driving, regardless of how casual they believe their use is. The program’s purpose is to, overall, ask the thought provoking question “is it worth it?” to drive recklessly [1].

In the midst of third block, all juniors and seniors were called to the bus lot to witness a mock car collision. The upperclassmen were greeted with the gruesome sight of Hannah McMillan (’18) laying down head-first through the windshield with fake blood drenching the scene. “I just couldn’t withstand seeing me or my friends in that situation,” commented Mackenzie Sauter (‘18).  Also, in the driver’s seat of the other vehicle was Andre Gathers (’18), with Mykel Vincent (’18) and Ajeya Hughes (’18) playing passengers in the backseat. The situation seemed rather urgent as their classmates came to the scene while they were all crying for help. The fire department soon came to the scene and removed the roof of the car with the use of the Jaws of Life. As soon as the students were relieved of the vehicle, the driver had to deal with a Field Sobriety test. The driver was seen by the student body failing the entire test and was apprehended. The drunk driver was therefore sent to the police department jail and had to go through a mock trial. “This experience was very eye opening,” admitted Lauryn Julia (’18).

Leading up to the mock car accident, the “Grim Reaper” called students out of class every 15 minutes who had volunteered to be representatives for the teens who lost their lives to drunk driving. A police officer read the dead student’s obituary written by their parent(s) to the entire class, followed by the Reaper removing the student from class. In the obituary, the officer explained the student’s demise and talked about their contribution to the school and their community. The now pronounced dead students would return to class with full white face make up and an every 15 minutes black shirt. To signify their deaths, the students were not allowed to communicate with the living for the remainder of the school day. To push the narrative even further, the now pronounced “dead” students’ parents were issued mock death notifications for their child.

At the end of the day, those students who participated in the staged accident as well as those who were made-up as the “living dead” were transported to a local hotel for an overnight student retreat. The retreat simulated the separation from friends and family. A support staff of counselors and police officers facilitated the retreat [1].

During their leave, each student wrote a letter to his or her parents starting out with:

“Dear Mom and Dad, every fifteen minutes someone in the United States dies from an alcohol related traffic collision, and today I died. I never had the chance to tell you…”

The next day, upperclassmen attended an assembly to wrap-up the two-day event. Part of the assembly included hearing those letters read aloud by the “living dead.” While the students only got the chance to hear two letters from students that morning, one being from Jordan Bell (’18) and the other being from Lexi Rye (’18), the point that this could happen to anybody at anytime was abundantly clear. Students gave Rye a standing ovation as her letter brought her and many classmates to tears.

The focus of the assembly stressed that the decision to consume alcohol and operate a vehicle can affect many more people than one might realize. The “Every 15 Minutes” program was an eye opener to the entire student body. The students that had to witness this mock tragedy are either drivers or about to become drivers. Hopefully this program stays in the minds of the students forever and especially during getting to and from prom. Is drinking and driving worth it? It’s safe to assume the majority of upperclassmen who witnessed the program would answer with a resounding “NO!”