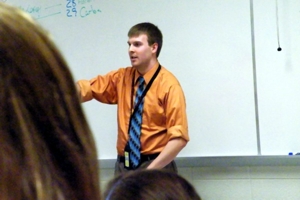 Besides the transfers and scrawny freshmen, there are several new faces in North Point’s hallways. Among them is Mr. LaBelle, the theater teacher now occupying room 512.

He searches the NEST check-in system on his computer for his name, but doesn’t find it. “Nope, not in the system yet,” he says. He may not be in the system, but the theater room definitely already has his added personal touch. The room is congenially decorated, with new posters all along the front wall and a frame filled with playbills from celebrated Broadway shows like Aida, The Lion King, and Wicked. The glorious sounds of the Phantom of the Opera soundtrack play in the background. He’s fully settled into his classroom, and can’t wait to be fully settled into the Waldorf area. “It’s really different here, but a nice atmosphere. [My wife and I] like being closer to stuff.”

Like several of North Point’s teachers, Mr. Labelle also grew up and attended school in Michigan. He graduated from Central Michigan University in December 2007 with a degree in Speech and Theatre Education, along with Health Education.

But even with solid schooling, finding a job as a teacher in the middle of the school year wasn’t the easiest thing in the world. “Michigan puts out a lot of teachers. We have a lot of educational programs but we don’t have the jobs.” After two years of substitute teaching, Mr. Labelle finally got his first permanent teaching job here at North Point—and he couldn’t be more thrilled.

“It’s what I’ve been looking for—full-time theater. I’ve got a great colleague that I’m working with in Mr. Minor,” he says. “North Point offers quite a bit for me, especially as a new teacher. I am in awe of how many opportunities I have.” Mr. Labelle continually asserts that he loves all the technology North Point has to offer. “I grew up with [tech] equipment that was forty years old at the time. For the last two years I’ve been helping out with theater back in Michigan, and I had been using equipment that wasn’t much greater,” i.e., equipment that’s not very conducive to making cool special effects for productions! “You wanted a tool, you had to bring in your own. At least here, I have resources. That’s a nice feeling.”

Mr. Labelle says that he’s also very excited to work with the thespians, and plans to work as technical director for the theater department’s upcoming shows. “[Mr. Minor]’s going to focus on directing while I get my feet wet. I love acting, I really do…I would love to direct, but…technical theater is my thing, it’s what I grew up doing. The only thing I love more is teaching theater.” Although Mr. Labelle has done lots of technical work for shows like Chicago, The Mystery of Edward Drew, and Junglebook, have no doubt that this techie has some acting expertise. Mr. Labelle has been in several shows, including Charlotte’s Web and Between Land and Sea, a script that he helped to revise with playwright Laurie Brooks.

In his acting, Mr. Labelle came to find that he had a strong liking for stage combat. “I’m looking to actually get certified to teach stage combat,” he says, “so that I can hopefully introduce that to some of the students.” It would for sure come in handy for this fall’s production of Shakespeare’s gore-filled Macbeth.

Between teaching the intro theatre classes and settling into a new state, Mr. Labelle has yet to start his graduate degree, but he’s looking for schools in the area to study educational theater for young audiences.

“When people think theater, oftentimes they just think, ‘Oh, let’s go see a show, we’ve got nothing better to do, it’ll be interesting.’ If you want that, stay home and watch TV or go to a movie,” he says blatantly. “My goal with theater is to have you leave a show thinking about it, thinking about the issues…That’s what I’d like to continue my master’s work in.”

With so many ideas bouncing in his mind, Mr. Labelle is sure to make a splash in North Point’s theater scene. We only have to wait and see what the new backdrop will be.