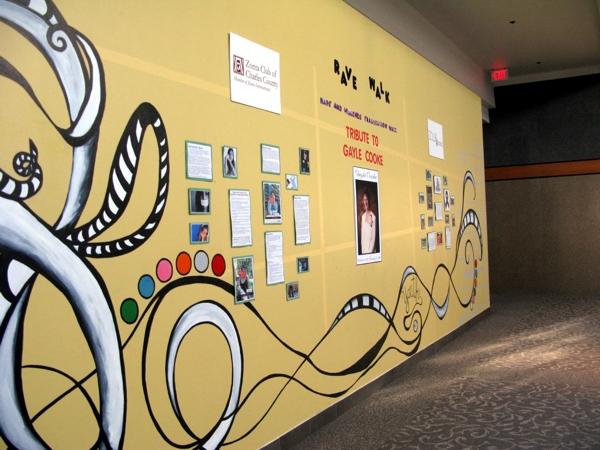 The North Point Z-Club recently participated in the 7th Annual Walk to End Violence Against Women in Charles County. On Saturday morning around 7:30, dozens of students, parents, and members of the Zonta Club gathered together for the 3 mile R.A.V.E. walk inside the St. Charles Towne Center, which is held in honor of Gayle Cooke, a kindhearted woman who was killed in an act of violence. With the assistance of her family and the Zonta Club of Charles County, the R.A.V.E. walk was held, with proceeds assisting abused persons.

Chick-Fil-A chicken biscuits, muffins, and other refreshments were offered for all those present for the walk, with a DJ playing music for all to enjoy. Mascots from sponsors in Charles County were also present, from the Charles County Public Library Raccoon to the Chick-Fil-A Cow, who helped create a lively, kid-friendly atmosphere. Several Charles County officials were also present. Men like Leonard Collins, the States Attorney, and Mike Phillips, a Delegate running for Congress, were introduced.

After the Pledge of Allegiance, the National Anthem (performed by Mike Phillips), and an emotional speech about the late Mrs. Cooke, a warm-up was held for the walkers, with the Mascots also participating. The walk was held afterwards, lasting several minutes, and prizes given to the largest teams and most money raised.

Although McDonough and Lackey students participated, North Point’s Z-Club had a large role to play in the walk. According to Brenda Dyeor, the event manager and coordinator, North Point was “responsible for putting a good majority of the event together,” and for creating a large mural in memory of Gayle Cooke on the second floor of the mall.

Overall, the event was lively and enjoyable. Mrs. Dyeor mentioned that the event was “fantastic” with the “biggest turnout yet” in terms of proceeds. After another successful walk, Z-Club has done a great job representing the school in the walk and have done the community proud by their great service for the sake of abused women. Mrs. Newton also invites anyone interested the club to come in and visit on the first half of NEST every 1st and 3rd Thursday of every month. Who knows? There might even be more Chick-Fil-A chicken biscuits available in later events they join!