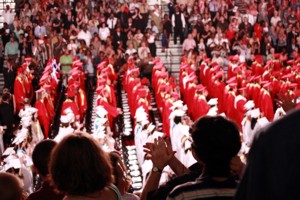 “Behold, oh Class of 2011, the dawn of freedom!” No words could better encapsulate the breathless excitement that filled the North Point Convocation Center on the evening of June 7, 2011 as the biggest, and most important, event in the school calendar kicked off: graduation. Year to year, every commencement ceremony exhibits a unique mood, from solemn to a full on party. The Class of 2011 combined the best of both worlds with an event defined by its passion, comedy, and most of all, joy.

More than an hour before the ceremony, North Point buzzed like on no other day of the year. Hundreds of staff members lined every corridor and parking lot, working together to shepherd the thousands of friends, family, and students who would be attending the event. The Convocation Center, or as Valedictorian Nick Teleky would call it, the gym, was transformed into a beautiful, warm space through soft lighting in yellow and red and creative decorating. Rows and rows of chairs sat empty in the middle of the room, awaiting the soon to be graduates to make their entrance.

There is lasting disagreement as to the merits of holding the ceremony at the school, instead of an outside venue, but those in attendance seemed to enjoy the setting. “I actually believe that this is the best place to graduate because this is their home turf and it’s more sentimental here,” said Mrs. C. Smith, an English teacher, as she kept watch over the gathering masses.

As the clock truck 7pm, the classic melodies of “Pomp and Circumstance”, performed by the Symphonic Band, began to swirl around the room. In marched the seniors, decked out in red and white gowns, yellow scarves, and various medals and pennants, led by the Junior Class Marshalls, the School Board, and North Point faculty. The students were met by hooting and hollering, a lasting feature of the night’s ceremony.

The ensuing speeches from various members of the Class of 2011 were comedic and heartfelt. Kayci Kirkham, Class President, noted that this group “defined what it is to be a North Point Eagle” after being the only students to start here in seventh grade.

After a final performance of the “Like an Eagle” by the choir, Salutatorian Audrey Springer took the stage. After thanking Erin Chapman and Teleky for tying so she could be Salutatorian, Springer discussed the ways that the students’ six or four year at North Point changed them. She ended her remarks with the class’ motto, “They’ll never be this awesome.”

The Class Song, Unwritten, led into the a highlight of the ceremony: a speech from the co-Valedictorians, Chapman and Teleky. The two used their time on stage to engage in good spirited roasting of their to be alma mater, touching on NEST, the school’s motto, the various name for the modulars, and how this could possibly be the best time in their lives. Their remarks were sprinkled with pop culture references, from Kanye West to Rebecca Black. Especially funny was the reminder that baby eagles have two options after being pushed out of the nest – soar or fall and die. Urging their class mates to “swag, swag forever guys,” the two received a standing ovation.

After several more speeches, the time came for the most important portion of the ceremony: the conferring of diplomas. As Mr. Felicitas and Madame McLaughlin read out the graduates’ names, they stood and crossed the stage, wearing expressions of accomplishment and exultation. Twelve years and thousands of tests, worksheets, and pencils later, freedom was theirs to have.