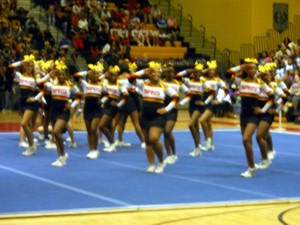 On Wednesday, November 2nd the North Point gymnasium was packed with the cheerleading teams, parents, and students of Charles County High Schools. The cheerleaders were seated in the bleachers on the back wall of the gymnasium, while students and parents filed into the side bleachers with their fanciful signs and overflowing school spirit.

Every team came to the mat with impressive and challenging routines to win over the judges. To add more to some routines, teams added boys to their line up. McDonough had male cheerleaders on both their junior varsity and varsity teams. Lackey’s varsity team also had a male cheerleader. The males added muscle to the builds of the team and also some flair with their tumbling skills.

North Point spirit showed up and showed out when the varsity football team came in with “#NPNation!!!” painted on their chests. The varsity and junior varsity squads let their spirit show when they started chanting “NP Nation” as the freshmen team was called to the mat. “They did really well. I am really proud of them,” commented Tasia Butler (’13) on the freshmen team’s performance.

All of the cheerleaders worked hard on the mat, but there were some standout performers who pushed through the obstacles that presented themselves during their performances. On Thomas Stone’s varsity team, a cheerleader lost her shoe after a build, but continued with the routine and a big smile for the judges.

The competition was a family affair, with parents dancing in the stands to the music and older siblings cheering on younger ones. There was a sense of pride on many family members’ faces. “They were a little shaky on one side, but they did fantastic,” said Heather Ellis, mother of D’Jate Sterling (’13), a junior varsity cheerleader.

As all the cheerleaders moved to the mat to await results, they let a bit of their anxiety go. When LMFAO’s “Party Rock Anthem” came on, a majority of the cheerleaders busted out their “shuffle”, but the highlight of the song was when sister and brother, North Point students, Sarah Buffington (’13) and John Buffington (’12) started “shuffling” in unison.

When the judges returned with the results, a silence of anxiety fell over the gymnasium as the cheerleaders and friends and family awaited the results. The announcement was made, and North Point had a clean sweep, taking 1st place in every division: freshmen, junior varsity, and varsity. When “North Point” was announced as the 1st place team, the North Point students rushed the mat to celebrate with the cheerleaders.

Many of the girls were exceptionally happy and beyond overjoyed. “After all the hard work I knew we had it. We just had to believe it,” said junior varsity captain N’Dea George (’14). The varsity team was really proud of their younger prodigies. “They did really good and I’m proud of them,” said co-captain of varsity Alexis Quille (’12).

Coaches and managers were very pleased with the girls’ success, especially after the struggles they were facing as the competition neared. “I think they did exceptionally well. There were things that fell and didn’t go as planned, but for us losing and gaining girls in the past couple days they did well,” said manager and past varsity cheerleader captain Charyte Edison (’12). Coach Millhouse was ecstatic with the girls’ win. “I knew we’d get it together in the end,” she said.

The North Point cheerleaders left the competition with smiles of ecstasy and thoughts of determination, ready to go to regional’s and bring home some more trophies for the trophy case. “I’m really excited! It’s my first year on varsity and I’m really excited to have a trophy,” said Oleshia Kelley (’13).