Students Vow to “Protect the Sack” 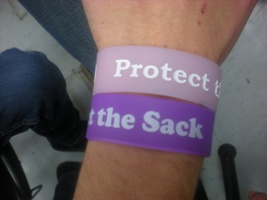 Every October, citizens across the nation celebrate Breast Cancer Awareness Month. People break out their pink shirts and ribbons, participate in walks for the cure, and join together to spread awareness of Breast Cancer. Once October is over, however, the hoopla dies down as people go back to their normal routines.

What many people don’t know, however, is that the ensuing month, November, is Testicular Cancer Awareness Month. Testicular cancer is discovered in an average of 5.5 men per every thousand in the United States, and can be diagnosed as early as 13 years of age. While the causes and effects of Testicular Cancer don’t get as much attention as Breast Cancer, it is just as important, and should be a priority for all males, adolescents and adults alike.

North Point students Will Knight (’13), Clayton Thornton (’14), Harrison Palmer (’14) and Nico D’Alessandro (’13) realized that Testicular Cancer doesn’t get the awareness that it should, and felt that something should be done about it. “We were watching the [Soccer] game after Cross County practice during Breast Cancer Awareness Month, and noticed that they don’t really promote male-oriented cancer games,” stated Knight. So the group banded together to start Protect the Sack, a movement where they sell bracelets with that very slogan amongst the local community to spread awareness of Testicular Cancer. “If the ‘I Love Boobies’ bracelets had become so popular, how come we couldn’t promote awareness for testicular cancer in a positive, catchy way?” Knight mused. As for the name, he went on to say, “We originally came up with ‘Save the Sack’, but that was the name of a trash company. So our next idea was ‘Protect the Sack.'”

The group hopes that they can make as many people aware as possible of this cancer, which is curable if it is found early enough. Both Thornton and Palmer know of the effects of testicular cancer firsthand, as both of them have an extended family member with it. Since starting the effort, they group has raised $288, which will go to the Testicular Cancer Awareness Foundation’s effort to help a teenager who is in remission from the cancer. “At the rate that we are going, we could definitely make about $3000 by the end of the year,” exclaimed Palmer, showing off his two versions of their bracelets.

*Side note – To learn more about Testiclar Cancer, go to testicularawarenessfoundation.org or www.cancer.gov. Also visit the group’s page, “Protect the Sack” on Facebook.