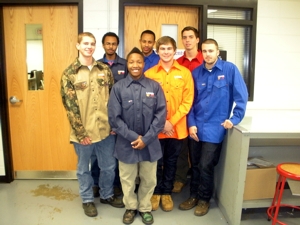 Each STI student here at North Point has the fortunate opportunity to carry their skills with them wherever they go. However, it is rare for a large group of students to carry their skills across the country together. From November 13-16, a few of the welding STI students attended a field trip to the McCormick Place building in Chicago, Illinois, where they represented North Point and presented themselves in front of several nationally-known welding companies, as well as the American Welding Society.

FabTech is a convention held every November that displays new forms of technology for several fabrication methods, such as cutting, finishing, forming & fabricating, and welding. While at the convention, the selected welding students learned how to work with the newest technology, attending many showcases and demonstrations from national exhibitors. They also had the distinct privilege to escort numerous educational career instructors across the floor of the convention, which consumed two halls of the four-hall building, showing them around the convention, and providing them with information about certain technology.

The North Point Welding STI was actually selected by the American Welding Society to attend FabTech. “The ‘AWS’ chose us to begin with, and then we all decided whether or not to go based on financial needs,” said Deandre Gray (’12).

Attending the convention caused some of the welding students to realize the importance of the industry; “There are so many new inventions coming out, and the level of technology is rapidly increasing. Welding is a great opportunity to earn tons of money,” said Stephen Brookbank (’12).

In fact, most of the students that attended didn’t even recognize just how large and successful the welding industry is. “The convention was a lot bigger than I expected it to be. There were so many machines & fabrication methods, and so much more information than I thought there would be,” said Sam Brock (’12).

The students also got to do some sightseeing while in the city. The ballroom of their hotel, Hotel 71, which was directly across the street from McCormick Place, was Batman’s room in The Dark Knight. Moreover, they were invited to attend the President’s Reception at the Hilton, where all the “bigwigs” from the American Welding Society interacted with FabTech’s attendees.

“The only thing that could have made the trip better was acknowledgement. We weren’t really recognized out there, and we were the only high school invited,” said Joel Wilson (’12). “We really just didn’t want to leave.”

Sadly, all good things must come to an end at one point. However the welding students continue to improve their skills each and every day, and put forth efforts to improve the fabrication industry, even if they are only seniors in high school.