Students Hit the Bay for Charity 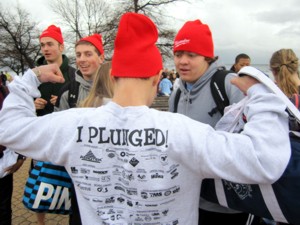 The depths of winter typically aren’t the optimal time for a trip to the beach.  On January 27th, nearly fifty North Point students thought otherwise, making their way to Sandy Point State Park in Annapolis for the sixteenth annual Polar Bear Plunge. The event, held as a fundraiser for the Special Olympics of Maryland, gives people from across the state to rush into the Chesapeake Bay in frigid temperatures.

As a whole, North Point’s delegation (comprised of the swim team and various members of the Student Government Association) raised nearly $2,400 for the Special Olympics. That amount was achieved in various ways. “I raised money by talking to teachers at our school, talking to relatives, as well as having my parents take it to work,” said Kelly Martin (’14), SGA Communications Officer. Mrs. Huffman, the SGA Sponsor, posted about the plunge on Facebook and sat back as $200 in dares from friends and family came in.

Last year’s Plunge boasted temperatures in the twenties, with ice on the ground and snow falling steadily from the air. Compared to that scene, 2012’s event was absolutely spring like. That does not mean, however, that the beach itself wasn’t chilly. “It was really cold, but I had already been freezing since they made us wait so long, so I was like numb,” said Austin Fisher (’13), a swim team member.

The Plunge itself was not a drawn out affair. Students and advisors lined up along the shore, and at the signal of divers situated in the Bay, ran into the surf. Most students stopped and turned back once the water hit their thighs, but a brave few placed their bodies totally underwater.

According to Martin, “Jumping in the water was not as bad as I expected. I think it was colder outside than in the water. I really liked getting the chance to jump in for a good cause.”

The Plunge was notable for its diversity. Students assembled from all parts of the state, including other high schools in Charles County and schools in Montgomery, Anne Arundel, and Baltimore.

Overall, North Point’s Plungers had a great showing. “It was fab,” said Huffman. “Who can’t get happy about supporting the Special Olympics? We’re with students who are doing good things.”