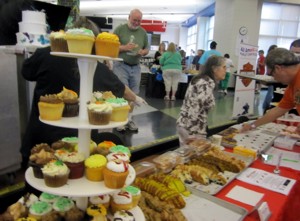 What do you get when you combine endless food, a ton of people, some Charles County spirit and a bit of St. Patrick’s Day flair? There’s only one answer: the Best of Charles County. The event, which is sponsored by the National Honor Society and Maryland Independent as a fundraiser for the American Cancer Society, featured around forty businesses from the community. It was an opportunity for them to show off their menus and products to students, teachers, parents, public officials, and a diverse array of other attendees.

BOCC kicked off at noon and the North Point cafeteria was immediately inundated by people eager to sample all they could. Popular stops included Rita’s of LaPlata, which had multiple flavors of Italian ice on hand, Wall’s Bakery, which featured a many tiered stand of cupcakes and tarts, and the Hard Times Cafe, whose array of chicken wings was excellent.

“It’s a really nice sized crowd. All seem very interested and satisfied by what’s here,” said Taylor Moore (’13), as she took tickets from visitors at the door.

Opinions on which dish reigned supreme at the event varied. For Parent Teacher Student Organization President Bob Lohr, there was a tie between the ribs from Famous Dave’s and the chicken from Texas Roadhouse. According to Julia Sutherland (’13) it was the wings from Hooter’s. Ameer Patel (’13) swore by the blueberry ice from Rita’s and Aaron Wilson (’13) stuck by the food from Red Robin.

The vendors present were not limited to restaurants. Sears presented a booth complete with a refrigerator, stove, and working drill. The Senior Visions Group brought along various paintings and photographs. A barbershop gave haircuts and a nail salon did manicures.

For the National Honor Society, months of preparation and planning went into hosting the Best of Charles County, so reaching it was quite the accomplishment. “[I feel] excited and relieved that a huge number of people showed up, the samples are great, and everything seems to be going right,” said Connor Roberts (’12), NHS President and Chairman of its Best of Charles County committee.  To his successor, he advised, “Plan ahead. Start early. Find some hardworking people, give it your all, and the rest will fall into place.”

“I’m blown away by the organization and effort put into making this event a success,” said Jessica Kirkham (’13), an NHS member who staffed BOCC.

Overall, the event was an apparent success. Stay tuned to see what flavors next year’s rendition will bring.

Award Winners from the 2012 Best of Charles County are as follows: