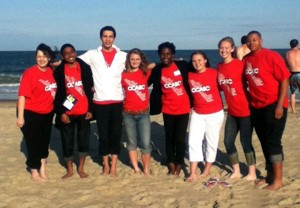 While most students spent the last few days of the week before last counting down to Spring Break, several members of the Student Government Association had begun their vacation early, along the beach in Ocean City. The seven students attended the annual Maryland Association of Student Councils Convention, a three day event that brought together nearly a thousand student leaders from across the state.

Wednesday night was highlighted by guest speaker Harriet Turk, who encouraged students to be themselves. She urged young people not to be afraid of saying “this ain’t your dream” to anyone who told them that what they wanted wasn’t possible. Turk got a warm reception from her audience. “I thought she was really funny,” said Kelly Martin (’14), an SGA officer.

Despite being located steps from the sand and surf in Ocean City, the Convention was not really a vacation. Thursday was dedicated to workshops created and presented by student leaders from across the state, on topics from team building and branding to passion. Several Charles County students presented on the school system’s Safe Driving Taskforce, which was created in the wake of a large number of teen fatalities behind the wheel. The Sherriff’s Office was present, and allowed students to try on goggles that simulated being intoxicated. Most participants could hardly stand up straight, let alone walk in a straight line.

The majority of the event was spent listening to speeches and debate from students vying for statewide officer roles within MASC. The 86 student strong Charles County delegation rallied behind Pearson Benson, a Milton Somers student, who successfully ran for the state’s 2nd Vice President position. Students from Carroll, Saint Mary’s, and Howard Counties, were elected as state President, 1st Vice President, and Treasurer, respectively.

“I think my favorite part was being with all of CCASC (Charles County Association of Student Councils) as well as the other regions. It’s nice being around people I don’t see everyday,” Martin stated.

Overall, in Martin’s opinion, “The Convention was good. But I wish the weather was a little nicer.”