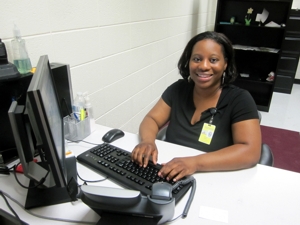 It is easy to imagine a list of North Point’s 250 staff members: teachers, administrators, custodians, coaches, food service workers. But there is one job title that most likely does not come to mind: Parole Officer. That’s right; this school has its very own liaison to the Criminal Justice system in Ms. Savoy, who handles everything from preventing altercations to testifying in court.

There are several crimes that most often lead to students spending time in front of a judge instead of a teacher.  Among them are theft, assaults, fights, and drug offenses. “They’re pretty much the same as adult crimes,” commented Savoy. She added, “There seems to be a growing number of robberies…things are always being taken.”

After a student is charged, it is Savoy’s job to take on their case. This can mean giving recommendations on whether a student should be subject to rehabilitation, treatments, a new home, or other alternatives. Savoy also writes court memos and works with staff at North Point to intervene where necessary.

Obviously, probation is no joke. It lasts about a year, but can extend until the age of 21. Individuals must complete every item in their court order and have upstanding behavior, like getting a job and maintaining good attendance.

Savoy’s job certainly keeps her on her toes. “It’s very hard to say sometimes how your day is going to be,” she commented. “You plan one thing, and then a kid walks in and says ‘I’m going to be in a fight’.” In a moment, her schedule is out the window.

Savoy is a Charles County native, having graduated from Henry E. Lackey High School. After finishing college, Savoy immediately dived into a job with the Maryland Department of Juvenile Services in the school parole officer position, originally at La Plata High. She worked there for five years before making the jump to North Point. Savoy glowed as she commented on how “North Point is like one big family.”

From speaking with her for a short time, it is clear that Savoy loves her job. “I want to help the kids work to be adults,” she said. “Who knows, the kids I’m working with could be my kid’s doctor in a few years.”