State Superintendent Gets a Taste of North Point 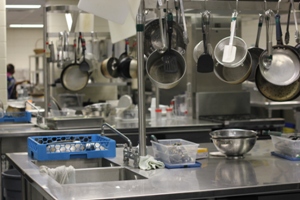 During her visit, Dr. Lowery toured several of North Point’s Science, Technology, and Industry classrooms to get an inside look at what goes on within the programs. The programs that she visited included Culinary Arts, Automotive Technology, Engineering, Electrical Construction, Biotechnology, and the Academy of Health Professions.

In every program Lowery stopped in, she was involved in a hands-on activity that helped her dive in to the day to day workings of North Point’s STI students. In Culinary, she helped with the preparation of one of the desserts that would be served later on in the day. In Automotive Technology worked on an engine and in Biotechnology, she cloned an African Violet.

The students enjoyed the opportunity to interact with the head of Maryland’s school system.  “It was a really cool experience to be able to share what we’re learning and doing with someone like Superintendent Lowery,” commented Tre Knott (’13), an Engineering student.

Dr. Lowery seemed extremely impressed with what she saw in the students and programs offered at North Point. “She was most amazed that students were able to learn and retain information. It’s one thing to learn, but to be able to teach someone else is a higher level of knowledge, and we did it,” Ms. Hill noted, with more than an ounce of pride in her voice.

North Point left an impression on Dr. Lowery that is likely not going to be forgotten for some time. While it is unknown when her next visit will be, students anxiously await their next chance to “show what they know.”