Tackling Bullying, One Week at a Time 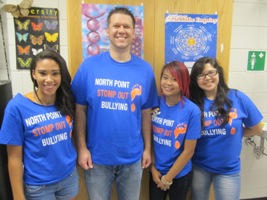 There are some things that never change about high school, regardless of whether one graduated last year or decades ago: the subjects studied, the excitement of Prom, the social divisions, the electricity of walking across the stage at graduation. But there is one more element of this stage of life that seems eradicable, and not in a good way: bullying. It is an age old problem in various forms, from verbal and physical to the more recent cyber bullying. The North Point administration, however, has decided that bullying does not have to be a permanent part of students’ high school experience. From October 22nd to the 26th, North Point held its first Stomp Out Bullying Week, aimed beginning a school-wide conversation about the issue.

The week-long initiative began with an anti-bullying video produced by the multimedia classes and introduced by Mr. Shannon, a Vice Principal, who spearheaded the campaign along with Ms. Wyse, an English teacher. On Tuesday, students were asked to wear orange, widely known as a color that represents the anti-bullying movement. Wednesday was “Cyber-Bullying Awareness Day,” during which low-tech hash tags were distributed, each with a complimentary message that could be given to other students. Thursday was the true culmination of the anti-bullying week: hundreds of students and staff showcased their support by sporting Stomp Out Bullying t-shirts. The blue and orange of the shirts was inescapable in hallways and classrooms across North Point.

According to Ms. Wyse, “the absolute primary goal was to get the awareness out.” Wyse, who originally conceived the idea to bring Stomp Out Bullying Week to this school, was shocked by the level of apathy she found among her students. Many that she spoke to did not consider bullying to be a problem at North Point. “It’s a great school, but [bullying] is here too and we all need to know about it,” Wyse commented.

Wyse originally heard about the Stomp Out Bullying campaign through a television commercial sponsored by Love Our Children USA, which has spearheaded the global movement since 2005. Wyse contacted the company and worked with them to bring the campaign to North Point.

“I was extremely pleased with the participation,” Wyse said, excitedly noting that even after Wednesday’s cyber-bullying activities ended, students were still trading hashtags such as “#you’re more fun than bubble wrap” and “#good job.”

Some students noted that the week-long initiative was a good place to start, but the realities of bullying are too complex to be addressed via a day of complements or t-shirts. They are correct, but the Stomp Out Bullying Week certainly met its goal of raising awareness.