Preventing Another Sandy, While We Still Can 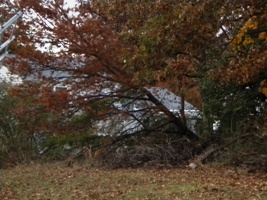 With the brunt of Super Storm Sandy bearing down on the East Coast last week, it’s no wonder that all of Charles County’s and many other counties’ schools were closed. While all the kids in the county were grateful for the extra days off of school, students in other parts of the East Coast came back to schools that were pummeled by Sandy.

Super Storm Sandy was no freak storm, but a taste of more to come. Here’s how it works: a hotter climate means less sea ice, and less sea ice means warmer water. Sea surface temperatures off the coast of the Northeast United States are now the highest ever recorded. Global warming is the reason to blame for the constant variations in weather and the melting sea ice. The warmer water causes more intense storms to form over the oceans. Experts warn of a super storm era to come.

Look at the aftermath of the storms. The death toll from the storm keeps rising and millions are still left without power. Sandy struck near Atlantic City, New Jersey, and New York. But what if areas like Maryland, DC, and Virginia are the next to be hit?

There are ways to stop the predicted, life threatening storms. Experts on the news are encouraging ways to stop pollution. A major way to put an end to pollution is to recycle. Instead of throwing trash on the ground and letting it pile up, take the few extra steps and throw it in the recycling bins.

Another way to prevent global warming is to simply walk. Or, instead of polluting the air with gas, people can carpool or ride public transportation to lower the amount of gases going into the atmosphere.

All are simple ways to decrease the odds of another deadly storm hitting the United States. Other attempts are being made to protect our land from the damages caused by the storms.

The buzz spread all throughout the country of how badly hurricane Sandy struck New York and New Jersey. Luckily, Charles County was fortunate enough not to be left with a lot of damage from Sandy. But in the long run, if people everywhere were to put an end to polluting and contributing towards global warming, then Super Storms like Sandy would not strike at all.